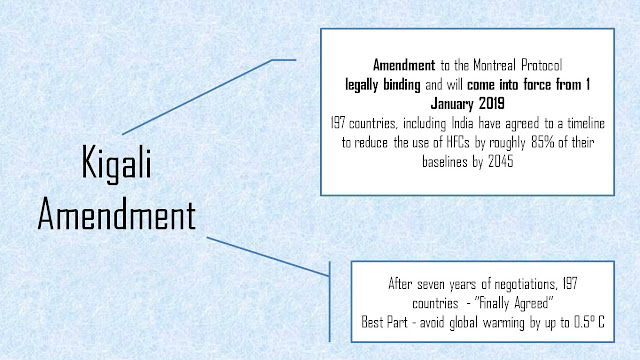 HFCs are a family of greenhouse gases (GHGs) that are largely used in refrigerants in home, car air-conditioners and air sprays etc. These factory-made gases had replaced CFCs under the 1987 Montreal Protocol to protect Earth’s fragile protective Ozone layer and heal the ozone hole over the Antartica.

In recent times, it was found that HFCs have several thousand times capacity in retaining heat in the atmosphere compared to carbon dioxide (CO2), a potent GHG. Thus, it can be said that HFCs have helped ozone layer but exacerbated global warming. Currently, HFCs are currently the world’s fastest GHGs, with emissions increasing by up to 10% each year.
Significance of the Kigali Amendment

The Kigali Amendment amends the 1987 Montreal Protocol that was designed to close growing ozone hole by banning ozone-depleting coolants like chlorofluorocarbons (CFCs). Thus, amended Montreal Protocol which was initially conceived only to plug gases that were destroying the ozone layer now includes HFCs responsible for global warming. This move will help to prevent a potential 0.5 degree Celsius rise in global temperature by the end of the century.

The Paris agreement which will come into force by 2020 is not legally binding on countries to cut their emissions. The Kigali Amendment is considered absolutely vital for reaching the Paris Agreement target of keeping global temperature rise to below 2-degree Celsius compared to pre-industrial times.
Timelines for different groups under Kigali Amendment

Some relevant data published by the Intergovernmental Panel on Climate Change (IPCC) reports that HFCs are several thousand times more potent than carbon dioxide. But at the same time it has been found that only very little of HFCs are present in the atmosphere when compared with the other green house gases like carbon dioxide. It is also estimated that increase in harm created by even 10 times more of HFCs from the present level would be small compared to the warming effects of carbon dioxide or methane. So, some experts argue that the need of the hour is to minimise use of fossil fuels as a part of world’s energy basket than seeking to minimize refrigerants and coolants. Secondly, when the world community is worried about the refrigerants and coolants they seem to ignore the harm the gadgets that need them creates in the first place. For instance, in India it is found out that a household running an AC for few hours every day is likely to use 800kg of carbon dioxide in one year from the AC alone. Similarly, for the production of any car made India on an average consumes about 140 kg of aluminium. According to the estimates provided by the International Energy Association, it requires 15 MW hours’ worth of electricity to manufacture a tonne of aluminium from alumina. It has to be understood that for generating each watt-hour of electricity emits roughly a thousand kg of carbon dioxide in India and on an average 750 kg worldwide. So, in an average 2,800 to 3,500 kg of carbon dioxide is released for manufacturing aluminium to be used in the production of a single car.


Montreal Protocol
The Montreal Protocol is an international treaty designed to protect the ozone layer. It came into force in 1989.
It aims at reducing the production and consumption of ozone depleting substances (ODS) in order to protect the earth’s fragile ozone layer.
It has been ratified by 197 parties making it universally ratified protocol in United Nations history.
It is also highly successful international arrangement, as it has phased-out more than 95% of the ODS so far in its main mandate less than 30 years of its existence.
India to eliminate the use of HFC-23 by 2030

India has decided to eliminate use of HFC-23, a greenhouse gas (GHG) that harms the ozone layer by 2030. With this, India, is taking the lead on tackling climate change. It was announced during the 28th Meeting of the Parties to the Montreal Protocol at Kigali in Rwanda.

The elimination will potentially check emissions of HFC-23 equivalent to 100 million tonnes of CO2 over the next 15 years. However, Indian companies will not be compensated for the costs involved in ensuring that these gases are not released. This move is considered as a major break away from the concept of financial assistance for every action on environment in which India earlier had shown the lead.

HFC-23 is a by-product of HCFC-22 (Hydrochloroflurocarbon-22), which is used in industrial refrigeration. It is a potent greenhouse gas (GHG) with global warming potential of 14,800 times more than that of CO2.
Paris agreement on climate change

On 12 December 2015, the Paris Agreement was adopted as an agreement within the UNFCCC framework. On 22 April 2016 {Earth Day}, 175 countries around the world have signed this agreement at the UN headquarters in New York, United States. India was also one of the 175 countries that signed it. As of June 2016, this agreement is not in force. It will come into force once ratified by 55 UNFCCC Parties, accounting for 55% of global greenhouse gas emissions. The Paris Agreement will replace the Kyoto Protocol after its second commitment period ends on 31 January 2020.

The Paris Agreement sets an over-arching target of keeping the emissions in control so that either the rise in global temperature remains below 2°C by the turn of 21st century or as low as 1.5°C. To achieve this goal, the countries will need to peak their emissions and then bring them down.

The other purposes of Paris Agreement are as follows:
Increasing ability to adapt to the adverse impacts of the climate change and foster climate change resilience
Making finance flows consistent with the pathway towards low greenhouse gas emissions and climate-resilient development.
Conclusion

No doubt Kigali Agreement is a welcome step. But at the same time, it has to be understood that focusing on technology alone while ignoring its trajectory would not give the desired results. It would be appreciated if the world works together to remove fossil fuels from the world’s future energy basket.

All the posts are written with lots of love for our readers.. We would love to see you sharing our posts. We never spam with wrong content.. You can happily depend on our content. With lots of love @Editor, Swapnamithra. Copyright reserved .