Swearing in as India's 15th prime minister, first primeminister of BJP with complete power to form a government - Mr. Modi sets a new acheivement at every point of his life. Making Gujarat as constitution of development Modi has become the write up for development goals and intiative for many chief minsiters of India. On completing his first month in PMO office let us have a brief look over on his hits and misses among people's hearts.

->Formation of SIT(special investigation team) on black money:
The very first cabinet meet of Narendra Modi took a crucial decision of forming up a SIT to take over the black money that has been floating over countries affecting the GDP of country.

Top bureaucrats have been ordered to make improvements in decision making a friendly work environment in central government.In an 11-point circular, the prime minister has laid stress on efficient and speedy decision-making in a transparent manner. All departments have been asked to reduce decision-making to a ‘maximum of four layers.'

All government buildings and work spaces of departments should be cleared of obstructions and spruced up, said the PM. 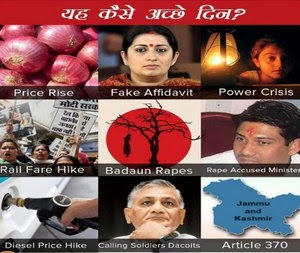 List of do's and don’t for ministers to end nepotism

With an aim to avoid any allegation against his government, PM Modi has issued a list of directives for his ministers. He has asked the ministers to avoid appointing relatives as personal staff, not to give government contracts to relatives and well-wishers, ensure probity in public dealings.

During the BJP Parliamentary meet, the prime minister asked his party's lawmakers - not to touch his feet, be regular in Parliament, speak in a decent manner, highlight constituency's problem.

Have a look at incidents that kicked-off controversy

Union HRD Minister Smriti Irani was at the centre of a controversy over her educational qualification after it emerged that she had made contradictory declarations when she contested Lok Sabha Elections in 2004 and 2014.

In her affidavit to the Election Commission for the 2004 Delhi elections, the actor-turned-politician mentioned that she is a 1996-batch arts graduate from School of Correspondence of Delhi University.

However, in this year's election affidavit, Irani said she has passed part-I of Bachelor of Commerce from DU’s School of Open Learning in 1994.

A major row erupted over the contradiction in her affidavits, with Congress demanding her resignation. Madhu Kishwar, who is considered to be close to PM Modi, also showed her unhappiness over Irani’s appointment as the HRD minister.

Minority Affairs Minister Najma Heptullah said, "Muslims are not minorities. Parsis are. We have to see how we can help them so that their numbers don't diminish."

“Reservation on the basis of religion is not permissible under the Constitution. Nor is it a solution. It kills the spirit of competition,” she said.

On his first day in office, Union Minister of State in the Prime Minister's Office (PMO), Jitendra Singh, kicked off a controversy by his comments on Article 370 which grants special status to Jammu and Kashmir.

He said, "The government is open to debate on merits and demerits of Article 370 for Jammu and Kashmir and would make efforts to convince the unconvinced by holding contact programmes with every section of society in the state.

Following his remarks, a war of words broke out between J&K Chief Minister Omar Abdullah and RSS functionary Ram Madhav.

Other political parties also jumped into the debate.

In 2011, a woman filed a rape case against Union Fertilizers Minister Nihal Nihalchand Meghwal and 16 others in Jaipur. She alleged that Meghwal had sexually assaulted her.
The minister has recently been summoned by a court in Jaipur.

The Congress is demanding Meghwal's resignation on moral ground.

The Modi-led NDA government asked the UPA-appointed governors to step down. The move drew a sharp reaction from different political parties.

In a report entitled 'Impact of NGOs on Development,' the Intelligence Bureau (IB) has said that the opposition to several development projects in the country by a significant number of NGOs, including Greenpeace, will negatively impact economic growth by 2-3 percent.

A report to the Prime Minister's Office said funds to certain NGOs were mostly used to fuel protests against developmental projects relating to coal, bauxite mining, oil exploration, nuclear plants and linking of rivers, resulting in stalling or slowing down of these projects.

It also claimed some NGOs and their international donors are also planning to target many fresh economic development projects including those in Gujarat.

In another report, IB has recommended the cancellation of permission given to Greenpeace for collecting funds abroad besides reassessment of its tax compliance.

Lashing out at the IB report, Aam Aadmi Party (AAP) said it is nothing but "criminalisation of dissenting voices" and is being misused by political bosses.

Controversy over govt circular to promote Hindi on social media

In the circular dated May 27, all ministries, banks and public sector undertakings have been asked to give preference to Hindi over English on their social media.

Pursuing the policies of the previous UPA government, Prime Minister Narendra Modi, who had condemned pre-budget hikes of the Manmohan Singh government as "anti-democratic," allowed an increase in the railway passenger fare by 14.2 percent just before the annual budget which is to be declared in the Lok Sabha early next month. Freight charge was also hiked by 6.5 percent.

Objecting to the increase in freight rates ahead of the railway budget on March 14, 2012, the then Gujarat Chief Minister Narendra Modi had written to the then Prime Minister Manmohan Singh and asked him to withdraw the notification.

"Such a hike violates the supremacy of Parliament. The timing of the notification, coinciding with the results of the assembly polls in five states, is surprising," Modi had said in a strongly-worded letter to the then prime minister.

Condemning the “unprecedented” hike, Left parties demanded a roll back. Demanding a rollback of the hike, CPI National Secretary D. Raja said, “Within a month, the Modi government has started showing its true colours. On the one hand, it is siding with the corporate houses and taking stark anti-people measures on the other.”

He asked how the new government was different from the UPA as the BJP regime was “pursuing the same policies of de-linking the hiking of rail fares from the budget. The government is yet to face Parliament for the budget.”

Former Railway Minister and RJD Chief Lalu Prasad also slammed the Modi government for announcing “big” hike in rail fare and freight, which he described as the “first salvo on the common man."

Strongly opposing the hike, Tamil Nadu Chief Minister Jayalalithaa urged Prime Minister Narendra Modi to roll back the increase in the interests of the poor and the middle class people.

The government's silence on the stand-off between the University Grants Commission (UGC) and the Delhi University over controversial Four-Year Undergraduate Programme (FYUP) has drawn sharp criticism from the Opposition.

A few thoughts as we complete a month in office

Dear Friends,
Today our Government completes a month in office. The support and affection of the people has been overwhelming and this inspires us to work even harder.
67 years of previous governments is nothing compared to 1 month, but I do want to say that in the last month, our entire team has devoted every single moment for the welfare of the people. Every decision we took has been guided solely by national interest.
When we took over a month ago, I kept thinking that I am new to this place and some people believed that I would take at least a year or even two to learn the intricacies of the working of the Central Government. Fortunately, a month later that thought does not exist any longer in my mind. My confidence and determination has increased tremendously and I credit a substantial part of this to the collective experience and wisdom of my ministerial colleagues and also to my experiences as a four time Chief Minister. The affection of the people and support from officials has also added to this confidence in large measure.
Over the past few days I have been meeting Ministers and Officials from various departments who have been making detailed presentations to me. I must share that these presentations have enabled a wonderful exchange of thoughts and ideas and we have come up with excellent roadmaps for the various ministries and departments.
CMs of several states have met me in the past month. They have extended their good wishes and talked about issues concerning their state. I look forward to working closely with them in the times to come.
I feel there are areas where surely we need to improve. A big challenge I am facing in Delhi is to convey to a select group of people about our intentions and sincerity to bring a positive change in this country. These are people who are both within and outside the government system. There have been some instances in the last month with which our Government had nothing to do yet these controversies have persisted. I don’t blame anybody but I surely feel that we need to strengthen systems whereby the right things are communicated to the right people at the right time. Hopefully things will change then.
Every new Government has something that friends in the media like to call a ‘honeymoon period.’ Previous governments had the luxury of extending this ‘honeymoon period’ upto a hundred days and even beyond. Not unexpectedly I don’t have any such luxury. Forget hundred days, the series of allegations began in less than a hundred hours. But when one is working with the sole aim of serving the nation determinately, these things do not matter. That is why I keep working and that is most satisfying.
26th of June is an important date for me. It marks the completion of one month of our journey to fulfil the aspirations of the people. This day is also another landmark day, when in 1975 I witnessed an important phase that taught me the significance of a vibrant democracy.  26th June was the day when the Emergency started, having been imposed an evening earlier. As a youngster, I have several memories of those testing times.
The Emergency surely stands out as one of the darkest periods in our history and is a grim reminder of the dangers associated with subverting freedom of speech, press, expression and silencing opposition. Our democracy will not sustain if we can’t guarantee freedom of speech and expression. Today is also a day to reaffirm our pledge to safeguard these values and at the same time create strong institutions through good governance so that that we never ever see those dark days again.
Once again I salute the people of India for their strong support and good wishes as we complete a month in office. I assure you that we are committed to taking India to greater heights in the years to come.
Yours,