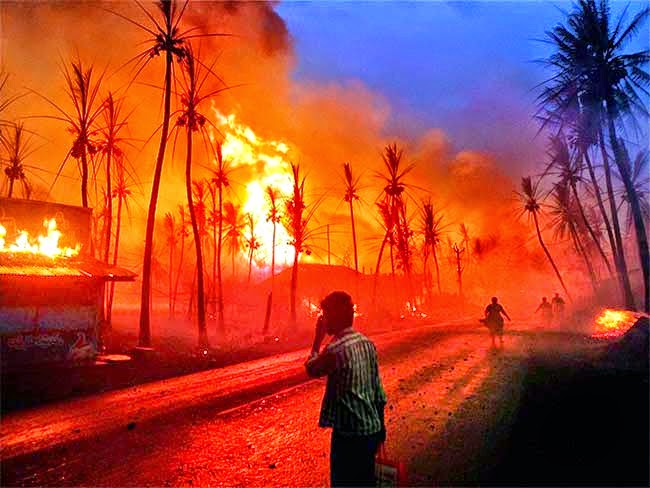 Gail tragedy that took life of around 15 people would have been more worse if it was not occurred at that moment. According to local people information it has been known that the fire started due to a tea vendor who lit his stove.Witnesses staying around the area of tragedy say that the gas has been spreading all over the night but has been ignored. They do support their ignorance because it was very common for them to complain ONGC officials about the gas leakage who never responded at a good pace. Whenever they do come for a checking up of all pipes that have around 50 years of life span would work better and may be that led officials think that they are just village superstitions.

Chaudhury, the tea vendor, lit a stove at around 5 am and there was a loud explosion. He and his family of six, including two children, never stood a chance. The ball of fire became an inferno that destroyed houses and shops within half a km.

Huge flames, almost 20 feet high, leapt out of the pipeline. It took more than two hours to put out the fire. At least 10 people were severely burnt and are being treated in a local hospital.

The 18-inch diameter pipeline supplies gas to a power plant operated by Lanco Infratech Ltd. It runs through the Nagaram village and lush fields and a coconut grove.

They claimed that they had often complained about gas leaks, always anticipating a tragedy like this. The pipeline, they said, was at least 30 years old and rusted but no one bothered to replace it.

Only temporary repair work was ever done, they allege. Residents pointed at a patch of cementing on the pipeline near the spot where it was ripped apart by the explosion.

Oil Minister Dharmendra Pradhan has ordered a high-level inquiry into the incident. Significantly, GAIL has been kept out of the probe.

He said that the fire had destroyed 10 acres of the coconut grove.

ONGC, the government-controlled oil company, has shut down its gasfield, just 50 kms away, after the fire.