Home » news » 18 killed, over 145 injured as train derails in Maharashtra

18 killed, over 145 injured as train derails in Maharashtra 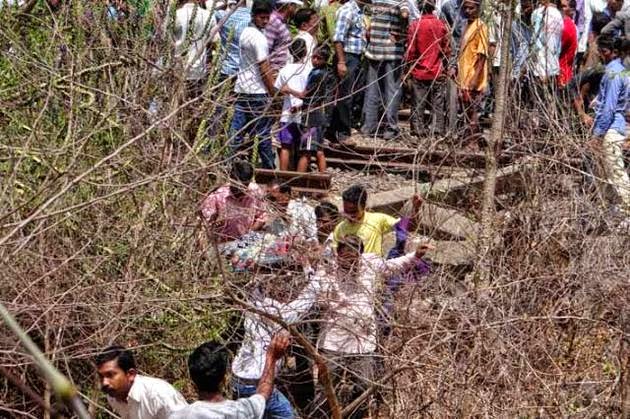 Eighteen passengers were killed and more than 145 injured after an engine and four coaches of the Diva-Sawantwadi Road Passenger train derailed between Nagothane and Roha stations in Maharashtra’s Raigad district at 9.40 am on Sunday. “Nobody is trapped inside the coaches. All passengers were moved from the accident site by 11 am itself,” S.K. Sood, general manager Central Railway, told The Hindu by telephone from the accident site.
“I was just done with my breakfast and was relaxing when we suddenly felt a jolt followed by a huge thud. The adjacent bogie had overturned and the two bogies behind had capsized. I drew my kids closer to me and somehow managed to fling myself out of the bogie,” one passenger told this reporter. A three-month-old baby girl is possibly the youngest victim of the tragedy. Authorities are yet to track her parents down.
“Locals brought her to our hospital and we later transferred her to the JJ hospital in Mumbai” a Roha government hospital official said. Rescue and relief teams were reportedly pressed into action as soon as the railway authorities learnt about the accident. “While two bogies overturned, two capsized because of the accident. Medical teams were dispatched to the spot as soon as we learnt about the incident. Cranes were pressed into action to clear the debris,” Railway Board Chairman Arunendra Kumar said. Mr. Kumar added that buses were arranged to ferry stranded passengers from the accident spot to the nearest railway station.
Services on the Konkan Railways line were suspended until Sunday evening causing a lot of inconvenience to passengers. Nikhil Sawant from Ratnagiri said, “We have been stranded at the Dadar railway station (in Mumbai) since early morning. We learnt about the accident through the press, there has been no proper announcement on the part of the Central Railways. There is a medical emergency in my family and now we have been forced to hire a private cab,” he added.
State Home Minister R.R. Patil reached the spot to take stock of the rescue and relief work. He told the press that the State government will also award compensation to the families of the deceased and those injured. Mr. Patil said, “Our priority is to save those injured in the accident and provide them with the best possible medical care. There would be clarity on the cause of the accident after the Railway Board submits it inquiry report.”
The Railway Ministry, meanwhile, has asked the Commissioner of Safety to submit its report on the accident within a month. On his part, Railway Minister Mallikarjun Kharge announced an ex-gratia (payment) of Rs.2 lakh to the next of kin of the deceased, Rs.50,000 to the grievously injured, and Rs.10,000 to persons who sustained minor injuries.
The Railways have set up a helpline at the Roha railway station.
HELP LINE NUMBERS:
CHHATRAPATI SHIVAJI TERMINUS MUMBAI 022-22755990 / 22694090
DADAR 022-24114836
THANE 02225334840
PANVEL 27468833
RATNAGIRI: 02352-228176 / 228951 / 228954
BELAPUR CBD: 022-27561721 / 23 / 24