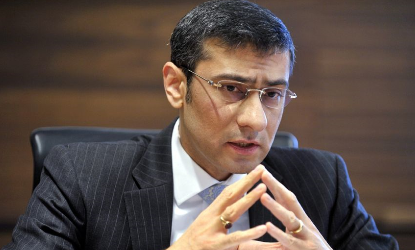 Nokia, which is set to close the sale of its phone business to Microsoft, will name Rajeev Suri as its next CEO and outline its new strategy with a focus on its networks equipment business, a newspaper said. Citing unnamed sources, daily Helsingin Sanomat said Nokia would also on Tuesday, along with its first-quarter results, announce how much cash it would pay out to shareholders. Investors have been looking forward to hearing about Nokia's next steps since it announced the 5.4 billion euro ($7.5 billion) Microsoft deal in September. Nokia said earlier this week it expected the deal to close on Friday after the companies had agreed to modify certain deal conditions. 46-year-old Suri, born in India, has been widely considered the leading candidate for the CEO post as in recent years he has helped the network division Nokia Solutions and Networks (NSN) turn profitable with a drastic restructuring plan and by ditching unprofitable businesses. The newspaper also said Nokia would over time abandon the name NSN.

Microsoft Mission To Save Windows:
When Microsoft's newly-crowned CEO Satya Nadella came on the stage at BUILD 2014, the company's annual event a few weeks ago, he was asked why developers should create apps for Windows platform. The question was a telling example of how much Windows has slipped. In the good old days there were no qualms about developing for Windows. For developers looking to strike rich, it was the only viable platform. At the same time, Nadella's reply shows that finally Microsoft realizes what it has lost. And at last there is a plan to save Windows. "(You should develop for Windows) because we're going to innovate with a challenger mindset, we're going to create the broadest platform opportunity in terms of sockets for you, and we are going to bet on that platform ourselves," he said. "Challenger mindset" is the key word here. After ruling the world of computers for nearly three decades, Windows is on the wane. It is no longer the top dog in the fight. You may still find it on most laptops and desktops, but the operating system is no longer the most used computing platform in the world. The problem for Windows is that the world has changed. Earlier, only desktops and laptops were computers.

Now, tablets and Smartphone have joined the mix. The result for Microsoft has been disastrous. As Nadella's comments at Build 2014 show, Microsoft is now frantically trying to fix Windows - in both the personal computer market and in the phone market. It has made a number of moves but the task to put the Windows on top again is too enormous and industry watchers believe Microsoft may not succeed. Numbers first For Windows the decline started in 2007 after the then Apple CEO Steve Jobs unveiled iPhone, a pocket size computer. In Q1, 2007 Gartner estimated that 62.7 million computers, 24.94 million Smartphone and 5.1 million PDAs were shipped worldwide. Based on the available market share of various operating systems, over 65.6 million of these devices were powered by different versions of Windows, giving Microsoft a market share of around 71%. Fast forward to 2013 According to Gartner reports, 1479 million computers, tablets and Smartphone were shipped in the world in 2013. Of these, around 324 million, most of them desktops and laptops, were powered by different versions of Windows. This gives Microsoft around 22% share in the total computing market, a far cry from the heydays when it used to rule the world of technology.   Two Windows that failed With iPhone and Android devices, which came out in 2008, turning out to be popular among consumers and with the release of iPad looming, Microsoft did sense the trend. It came out with Windows Phone and Windows 8 in 2010. Both failed Four years after it was shown, Windows Phone has a share of little more than 3% in the worldwide Smartphone market. Windows 8, meanwhile, has not only failed to find many takers and has lagged behind Windows 7 in the rate of adoption, it has antagonize a large number of computer users. There were a number of problems with both Windows Phone and Windows 8. In the case of Windows 8, Microsoft probably knew it had a problem. The operating system had a significantly different user interface and a focus on touch screen devices at the cost of traditional computer users. But Microsoft ignored it. It probably thought that using its dominant position in the market - consumers rarely get an option to choose the version of the Windows because it comes pre-installed - would push the new OS and people may not like it in the beginning but they would learn to love it. That didn't happen.

Paul Thurrott, a blogger who mostly writes about Microsoft products, termed the OS "disaster". Patrick Moorhead, a PC industry veteran and president at Moor Insights & Strategy, believes that Windows 8 "has hurt Microsoft's image for a long time". "While I do think that the dual-experience is the way of the future, Windows 8 confused less technical users," says Moorhead. On Windows Phone side, Microsoft was more receptive to the flaws and drawbacks of the OS. It acknowledged the feedback from consumers. But it didn't move fast enough to fix the OS. At a time when Google changed Android every eight to nine months, Microsoft came up with yearly minor updates. "When you play the catch up game it is imperative to have very compelling offerings but that was not the case with Windows 8 and Windows Phone 7," said Vishal Tripathi, principal analyst with Gartner.

He added that when consumers saw what Microsoft has come up with Windows 8 and Windows Phone, they gravitated towards products offered by Google and Apple. In the enterprise space, meanwhile, companies simply refused to move to Windows 8. "People are holding on to the older versions of Windows and have not shown much interest upgrading to Windows 8. Also, among the companies that have upgraded the PCs in the last two years, majority of them have opted to downgrade the operating system to Windows 7," said Tripathi. Fixing Windows. But is it too late? As Nadella's "challenger mindset" comment shows, Microsoft is finally aware that it has to start fighting to save Windows now. In fact, even before Nadella became the CEO, Microsoft had started fixing Windows. In late 2012, the company announced the resignation of Steven Sinofsky, a senior executive who led the team developing Windows 8. Though Microsoft did not acknowledge that Sinofsky was fired, the move was seen as a part of the course correction that the company was doing on Windows.

Then in 2013, Microsoft announced Windows 8.1, an update to Windows that added the Start button, albeit largely cosmetic in nature to the OS, as well as introduced a number of other features that made using the OS on non-touch screen devices like traditional computers and laptops a bit easier. The idea now, as Windows division India chief Amrish Goyal tells TOI, is to take a better look at the feedback from consumers, listen to their grievances and then tweak Windows accordingly. This year, Microsoft has come out with Windows 8.1 Update, which carries further user interface refinements to make the OS suitable for traditional computers, and has also announced return of a Start button that is closer to the one in Windows 7 in terms of functionality. "Windows 8.1 Update 1 is what I wish Windows 8 was from the start as it addresses the major usability issues that plagued early releases. It's probably a release that businesses would even consider, too, as the desktop to Metro transition is easier," says Moorhead. On the Windows Phone side, Microsoft has almost caught up to Android and iOS in terms of feature and functionality with Windows Phone 8.1, which will be rolled out to consumers in the coming months.

More significantly, the company has made some significant behind the scene moves to compete better in the market. With Windows Phone 8.1, Microsoft is making it easier for any company to launch Windows Phone. "We (now) have licensing agreements with Chinese ODMs and companies can directly approach the ODMs to get Windows Phone devices. They don't even have to talk to Microsoft India to sell Windows phone here," said Vineet Durani, who heads Windows Phone division in India. Microsoft has also made Windows Phone more accessible to users. "See it like this: Through APIs earlier we were opening around 20% of the OS to app developers. Now we are opening almost 80% OS. This will help developers build better and more functional apps," says Durani. However, the most significant (and possibly desperate) move to save Windows came a few weeks ago at Build. Microsoft has announced that Windows, including the version for phones, is going to be free for use in devices that have a screen size of less than nine inches. Windows will also be free for Internet of Things devices in future.

The problem is that Android, and Apple with its iOS, are significantly ahead in the game now. "I don't believe that Microsoft will be able to turn the clock back, as Android and iOS have both grown so popular and powerful. Android, in a sense, has replaced Windows as the cost-effective, open platform," says Moorhead. "Windows still has a future, but a diminished one. It still has the dominant position in full-featured business PC platforms and I don't see that changing soon. Windows could wind up being the preferred business platform."