Chiranjeevi About PawanKalyan Meeting With Modi 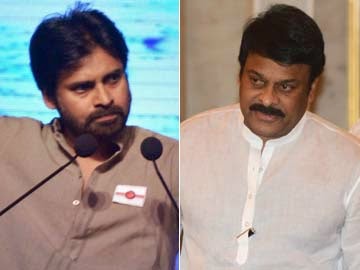 Union minister and Congress leader K. Chiranjeevi has found fault with his brother Pawan Kalyan for meeting BJP's prime ministerial candidate Narendra Modi.Chiranjeevi told reporters in Visakhapatnam on Saturday that Pawan should not have met Modi as he is facing allegations of involvement in post-Godhra massacre."I believe my brother is secular but his meeting with a key leader of communal BJP surprised me," said Chiranjeevi, a former superstar."I doubt whether my brother has knowledge of the allegations Modi is facing over his role in the post-Godhra massacre," said the actor-turned-politician.He pointed out that while BJP president Rajnath Singh and other leaders called Muslims and gave a clarification, Modi has neither given an explanation nor apologised."If my brother had met Modi after seeking an explanation from him, maybe I would have accepted it," said Chiranjeevi, who is heading the Congress campaign committee in residuary Andhra Pradesh.Pawan, a popular Telugu actor, who floated Jana Sena last week, met Modi in Ahmedabad on Friday and declared his support to his candidature for the post of prime minister.The youngest brother of Chiranjeevi described Modi as the right man for the top post and claimed that he declared his support on behalf of Telugu-speaking people of both Telangana and Andhra Pradesh.While launching his political party, Pawan had given a call for 'Congress hatao, desh bachao' (Remove Congress, save the nation).Chiranjeevi has already stated that he would treat his brother like any other political rival.