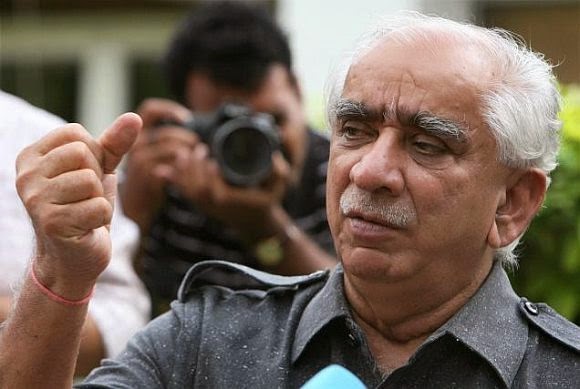 Upset over not being allowed to contest the upcoming Lok Sabha polls from his home constituency, senior BJP leader Jaswant Singh is likely to resign from the party tomorrow,as per sources.Mr Singh, 76, wanted to contest what is likely to be his last election, from Barmer, the constituency in Rajasthan where he was born. But the BJP ignored his request and instead decided to field Colonel (Retd) Sona Ram Choudhary, a former Congressman who recently joined the party.Expressing his disappointment over the BJP's decision, Mr Singh told today, "My honour cannot be subject to trading." However, he did not confirm whether he would contest as an independent candidate from Barmer.Aiming to placate the senior leader and to play down the controversy, BJP president Rajnath told reporters, "He (Jaswant Singh) is a senior leader of the BJP and is highly respected. His esteem cannot be calculated by a mere ticket." His colleague Arun Jaitley added, "It is unfortunate that we could not adjust him. The party will find some other option for him."The BJP picked Col Choudhary for Barmer after much persuasion by Rajasthan Chief Minister Vasundhara Raje who argued that as a Jat, he could help the party in the constituency where Jats are the dominant community. Mr Singh is a Thakur.Ms Raje reportedly also hopes that fielding the Colonel will help the BJP get Jat support in adjoining constituencies. The move has upset a section of BJP workers in Barmer who were backing Mr Singh. They are upset over supporting a former Congressman, who they had once fought elections against.Jaswant Singh has never contested from Barmer. He won Lok Sabha elections from Chittorgarh in Rajasthan in 1991 and 1996, and from Darjeeling in West Bengal in 2009.