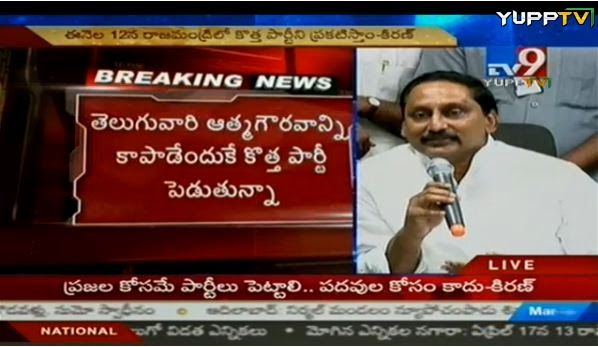 -CM Kiran Kumar Reddy making his discussions with the suspended MLA's of congress in Madhapur Image Hall.
-Kiran Kumar Reddy expresses that the way of telangana bill has been passed is very depressing and suspending the congress Mp's is against parliamentary way
-The way the centre dealed with the telangana bill made me resign to congress party and serve for people
-Telugu Desam Party is still swinging in both the ways and not have a clear idea who never talked in assembly -Kiran Kumar Reddy
-YSRCP is very curious about becoming CM but they keep plenary meetings and say in 50 days they could be in a very good political career-Kiran
-Modi says they are killing the mother of andhrapradesh and dividing the state and Adwani says he has never seen such a defective bill and coming to Manmohan Singh , he says that he is depressed at the way MP's are behaving but they never thought of telugu people opinion -Kiran Kumar
-Every party today has only one goal of being CM of andhrapradesh but not to serve people and think about the people.
-And,finally Kiran Kumar Reddy anounces that he is establishing new party in rajamundry on 12th march
-The only theme of party is to make people stand in good and developing way

Media:Sir, it is being told that you are establishing party to cover your corruption?
Kiran: Iam like a open note book and transparent in my schemes and ways. When iam into the post 46,000 crores is our income and now it is 86,000 crores and I challenge to test my ways

Media:Sir, Governor is testing your last transactions ?
Kiran: Who is governor test my ways , let him test and i challenge him to prove it.If anyone can prove about my transactions can go and challenge. I cancelled Knowledgeed park and made treasure of the state reservable and many more..

Media: Sir, if you are not into ruling again will you continue?
Kiran: Are we not staying now? Being in CM position and congress party we have been opposing our party about the decision and now we stand only for telugu people.I dont want anyone to come with me but I want them to make telugu people to stay in a respectful manner.


- Iam not afraid of anything and I never do things which makes me stand before people ashamed and iam ready for it.

Media: Sir, will you try to get andhrapradesh back again in same way?
Kiran: Germany type of country only got back and wgy cant we?  Telanga after power formation got realised about power shortage and when I said they never cared about it.

Media: After getting addicted to CM post , it is being said that you want it
again so you are establishing party?
Kiran: Iam never addicted so and if it is so i would never resign and would expect your co-operation.I never ran for the post to Delhi.

Media: What is you party name?
Kiran: Dont be curious It will be announced . Everything will be clear after 12th meeting in Rajamundry and i welcome everyone whoever likes our goals and ambitions and i promise that you will see a new way of party from now and telugu people will see a party for them.
We are forming new party for upholding the dignity of telugu people