A+ A-
Print Email
When I was in Chennai, to attend a workshop at Anna University, I found this book in a roadside book-lorry. I fond the book so interesting and the characters so real that I forgot to had dinner and completed it within 7 hours at the same night.
This novel narrates the story of three IIT graduates and their life at India's Premier Technology Institute. The story is all about their friendship and differences, study and enjoyment, career and ambition, parental pressure and peer pressure, love and sex. And as the subtitle of the novel – What not to do at IIT – suggests, "This is not a book to teach you how to get into IIT or even how to live in college. In fact, it describes how screwed up things can get if you don't think straight."
The author Chetan Bhagat himself is an IIT and /IIM graduate. He worked in Hong Kong and then relocated to India and working in an investment bank apart from writing books and screen plays. He is author of three novels Five Point Someone (2004), One Night @ the call center (2005) and recently The 3 Mistakes of my Life (2008). The New York Times quoted him as the “biggest selling English author in India’s history”.
Title of the novel “Five point some one” is taken form GPA system used in IIT. In the ranking system in III five points are considered average rank.
Hari, Alok and Ryan are three main characters. They are roommates and studding in the same department at IIT. These three strange students became close friends after a ranging session by seniors and they stand up for each other’s during the four years at IIT on every occasion, despite their personal conflicts several issues. They are far from the image of an IIT graduate is generally perceived to be and more like an average middle class youth. 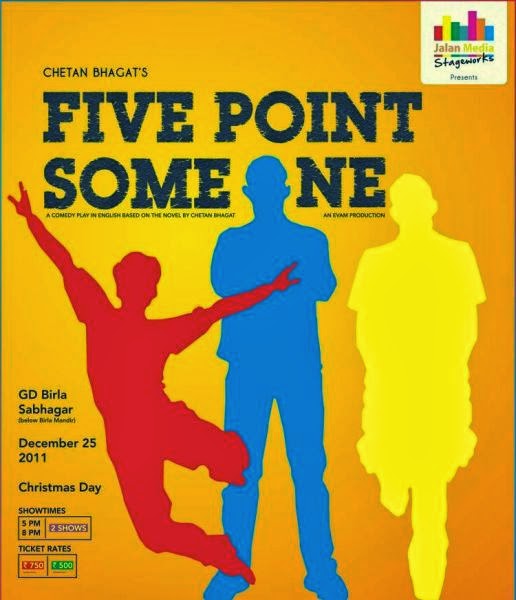 Download
In the novel Hari narrates the story. He is an average in study, seems confused but he keeps all three fiends together, always taking the easy way out, fall in love and had sex with the daughter of his head of the department.
Ryan is son of rich parents, a born rebellion. He hates his parents, as he feels neglected by them. He wants to be innovator and he thinks that the IIT system puts hurdle in one’s innovation.
Alok belongs to a typical lower Indian middle class family, burdened with lots of expectations and responsibility. He wants to get good GPA so that he can get a good job and support his family. This makes him some times selfish.
They found themselves stuck in IIT system. They get bored with study, assignments and projects and wanted to enjoy the life and have fun to its fullest. This leads to their lower GPA in class quiz and exams. They managed to secure hardly 5 points GPA at a scale of 10, ranking near the end of their class. And this means the end of their bright career.
The story describes the ups and downs of their life in campus. Their reaction on scoring lowest GPA in the class, how they are perceived by students and professors on the basis of their GPA, their affection, their conflicts, their drinking habit and their strategy to beat the system.
Meanwhile Hari fell into an affair with Neha, daughter of his head of department, Professor Cherian. When these three friends were in a great trouble, they found another professor Veera. He keeps confidence on his student and inspires them to think and act differently. He become the mentor of the three friends and supports them when they needed most.
When the three friends realized that their future is at the stake they make a plan to steal the paper from his professor’s office. What happened to their plan? What happened to their career and dream? Would Hari able to get married with Neha? Would Ryan succeed in his innovation? Would Alok lived up to the expectations of his family?
If you have never read any English novel, I strongly recommend you to start with this one. The novel is of only 270 pages and written in very simple English. The book is written in conversational style, which gives a feeling that events are happening in front of you. Characters and story seems very real, except some points like appearing in viva after taking a glass of vodka, but its ok since it is a work of fiction.
At the end author Chetan Bhagat wonderfully conveys the message of the novel in the form of convocation speech.