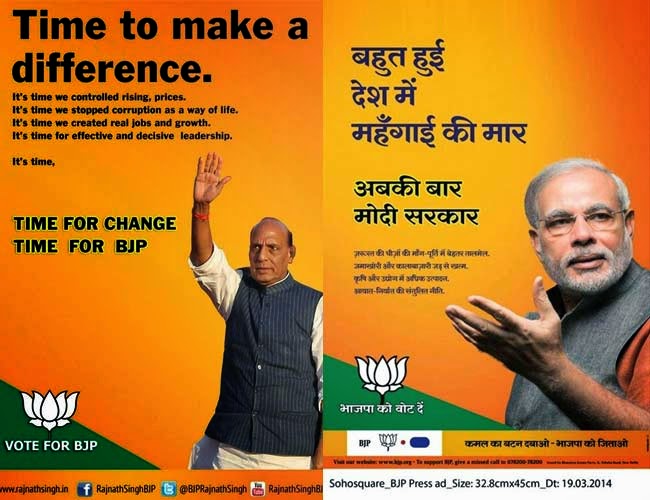 The BJP, accused by its critics of making Narendra Modi the sole point of its campaign, was today left to explain confusing signals from two posters tweeted by its chief Rajnath Singh.At 1:17 pm, Mr Singh tweeted an unseen poster starring himself, with the words "Ab Ki Baar, Bhajapa Sarkar (Time for a BJP government)." The campaign, which missed the usual Modi image, seemed to respond to criticism that the BJP is becoming a one-man show.But 33 minutes later, Mr Modi was back on the forefront with the BJP chief re-tweeting the official party poster, with the slogan "Ab Ki Baar, Modi Sarkar (Time for a Modi government)." The slogan is part of a nationwide billboard campaign that promises to end price rise and corruption if a Modi-led government comes to power after the April-May election.Those who caught on to Mr Singh's switch asked instantly in tweets whether the BJP had "dropped the earlier slogan" or whether the different tweets reflected an inadvertent mistake.BJP sources claimed that the first tweet was an error. Sources close to Rajnath Singh said the first poster was for his own social platform, not for public release.But at a time the party is fending off barbs about Mr Modi eclipsing all other leaders, a poster that projected Rajnath Singh raised speculation of a possible course correction.The party had yesterday disowned a controversial "Har Har Modi" slogan after religious leaders objected to the use of a centuries-old chant for Hindu god Shiva to promote the BJP's prime ministerial candidate."Some enthusiastic supporters are using 'Har Har Modi...'. I respect their enthusiasm but request them not to use this slogan in future," Mr Modi tweeted.Earlier this month, the BJP's ideological mentor Rashtriya Swayamsevak Sangh, or RSS, cautioned its cadre against "chanting NaMo, NaMo", a moniker based on the first syllables of Mr Modi's name. The RSS frowns on what it calls a "personality cult" in the BJP, stressing that no individual is bigger than the organisation.