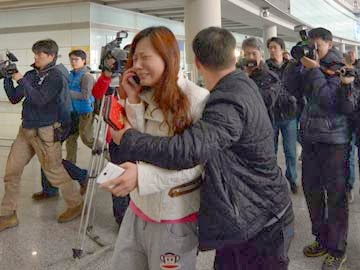 Malaysian Prime Minister Najib Razak says a new analysis of satellite data indicates the missing Malaysia Airlines plane plunged into a remote corner of the Indian Ocean.The news is a major breakthrough in the unprecedented two-week struggle to find out what happened to Flight 370, which disappeared shortly after takeoff from Kuala Lumpur to Beijing with 239 passengers and crew aboard on March 8.Dressed in a black suit, Najib announced the news "with deep sadness and regret" in a brief news conference late Monday night. He said Malaysia Airlines has informed the families of passengers of the plane's fate.


Najib said the information was based on an unprecedented analysis of satellite data from Inmarsat.

A Texas semiconductor firm said on Saturday that 20 of its employees were confirmed passengers aboard a missing Malaysia Airlines jet that has abruptly vanished.Among the Freescale Semiconductor employees aboard Flight MH370 were 12 people from Malaysia and another eight from China, president and CEO Gregg Lowe said."At present, we are solely focused on our employees and their families," he added in a statement. "Our thoughts and prayers are with those affected by this tragic event."Rescuers were still hunting for the whereabouts of the twin-engine plane that was carrying 239 people aboard as it travelled from Kuala Lumpur to Beijing more than 24 hours after it slipped off radar screens somewhere between Malaysia's east coast and southern Vietnam, triggering an international search effort.The 153 Chinese passengers aboard the plane included an infant, while 38 Malaysians and seven Indonesians were aboard.Six Australians, five Indians, four French nationals and three Americans, including an infant, were also among those listed and the Dutch Foreign Ministry said one Dutch passenger was on the plane."The entire Freescale Semiconductor community is deeply saddened by this news. The company is continuing to monitor the situation and will provide more information as it becomes available," the Austin, Texas-based firm said.Freescale said it was making counselors and other professionals available to employees as part of "around-the-clock support for those impacted by this tragedy."The company's products serve the automotive, consumer, industrial and networking markets.They include microprocessors, microcontrollers and sensors, as well as analog integrated circuits and connectivity.Freescale has design, research and development, manufacturing and sales operations around the world.