A+ A-
Print Email
For many of us who find it difficult to face the challenges of life, Maneesha Ramakrishnan is an example. 5 years after the Carlton Tower went on fire, she is still coping with her changed lifestyle, but taking on the lessons of life one by one, with pride and confidence.
She almost lost her life, her voice, but what she gained was immense strength, perseverance, and most of all love for life. Now, 45, she recalls the ill-fated day as a strong message to those who question-"Why me?" 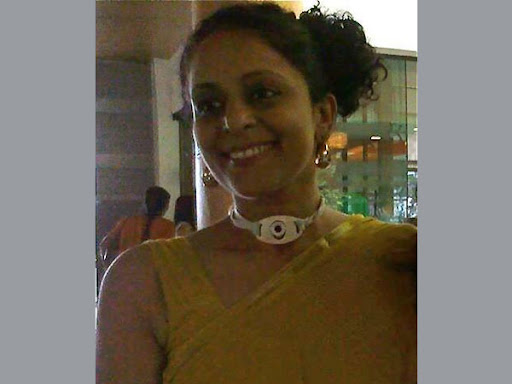 It was a normal day for Maneesha Ramakrishnan, loaded with meetings and tremendous pressure at work. "I was in a a meeting at on the 7th floor at 3 o'clock when suddenly all the phones got disconnected. I ran out to see what happened and was taken aback when I saw people running, panic-stricken. They were calling for help and screaming at the top of their voice. The office boy informed that the building was on fire and there was no escape route. By that time, thick, black gas filled the entire floor. It was difficult to breathe and see anything."
No liberty to lose sense
Maneesha was not the only one who was facing this situation, but others panicked too. However, she regained control over her mind and started breaking the glasses so that they could breathe.

"I could see people from the ground floor spreading their dupattas and cotton gaddas and asking us to jump. Sme people on the fifth floor were vomiting. Even in pain, I could realise the miraculous affect of human generosity. I could realise that my skin was burning and the air had turned awful. At point, I had almost given up and decided to jump, but was held back by my colleague. I looked for water pipes to climb down, but there were none. Surprisingly, the exit doors to the building were locked," Maneesha said.
Hell broke lose over her and her colleagues when the firemen came to their floor and went back when they did not get any response to their calls. Maneesha's last hope was gone. "I submitted myself to God's will and thought he had other plans. The smoke that was unbearable had started becoming familiar. I could see images of death....I had befriended it, but the only thing that bothered me were my two sons. What will they do if I was dead. They only had me. Then, I thought God had plans for them too."


Dead, not yet
It was past an hour and Meenakshi heard voices. She could not speak a word, but decided to give it a last shot. "I gathered all my strength as I was tired and exhausted and touched the fireman. That was it. I realised being picked up by four of them and encouraged to climb down the stairs of the 7 floors. I told them, I cannot walk which is when they carried me down. But before going, I told them that there were many more people inside, waiting to be rescued." 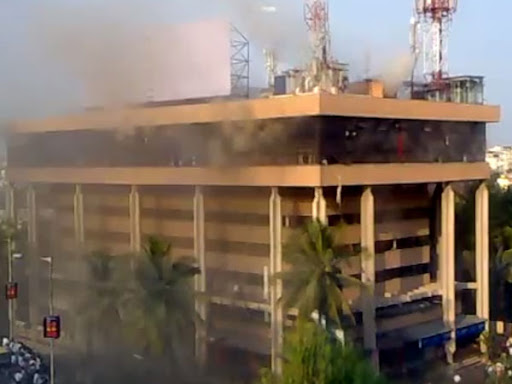 She was handed over to the cops who then took her to Manipal hospital.
The recovery
Thus, began the arduous 9 months in ICU when Maneesha was on the ventilator almost the entire time. Her health fluctuated and she endured life-threatening situations every now and then. "I underwent 9 surgeries and even the doctors had given up, praying for my death rather than libing in pain my entire life. But I would not give up. My vocal chords were a mess, most of them damaged beyond repair. I heard the doctors saying that I was the worst affected in the tragedy."
Despite a painful, slow recovery, Maneesha's driving point was hope and humor. "I teased the doctors and the nurses, advised them on life by writing on a piece of paper (laughs). I was their best patient, never complained about anything," she says. No wonder, she had given hope to the doctors too about her survival.

A lesson learnt and moving on
Being a single parent, Maneesha almost lost everything in the tragedy. But she chose to get rid of the sordid and dark and move on with lessons of life. "I am a believer in God. I used to have a beautiful voice and when I lost that I went in isolation. But then I understood, it was God's will that I live and I am living. I may not have my voice, but everything else is fine. I never questioned God. Perhaps, this was a communication from him."

Challenges
9 months of hospitalisation, and 9 surgeries had left Maneesha weak. "I entered the hospital as a healthy 75 kilo and was dispatched home as a 28 kilo weakling. I saw myself in the mirror and broke down for the first time. I am still recovering from that sight and its consequences. However, it took me from 3 years to accept my emotional, financial and health condition."
Add to it the challenges of day to day life. "I find it difficult to breathe, my knees have been affected and my health condition fluctuates with season change. But, I love and value myself more. That is what I have gained."
"My belief in God is getting stronger by the day when I think who gave me the strength to bear everything? Who healed me? Who saved me? Who gave me the power to do everything on my own even after this?," says Maneesha.

No ill feelings, but fight for justice is on
"Carlton Tower and this tragedy are my children. I have no ill-feelings for the building as it has given me the best 6 years of my life. They have become a part of me," she says. However, she did not give up on justice. "I was shocked to know that the office boy had jumped to his death and I wanted justice for his family. Of course, I had my own motivations as I was going through immense financial crisis too."
At this point, Maneesha's voice moistens and she reveals her financial ordeal at the hospital. "CM Yeddyurappa offered to pay for the ICU charges only if I shifted to a general bed. I had no choice, even though I knew my health required a private ward and isolation. I had no hopes of getting any insurance from my company too."

Nevertheless, Maneesha carried on with her fight for justice even after recovery. Criminal cases were lodged against the Carlton Tower owners and she continued to attend the court hearing till her health permitted. She also visited the Vidhana Soudha multiple times, but no use.

"I had to let go. Felt bad, but accepted this too," she said. In 2013, she organised a flash mob with her sons, with the support of Indiranagar police and marched till Carlton Tower for the first time after the incident. "The tower is shut, but memories flooded back. I prayed for the departed souls and offered Shraddhanjali to each of them."

"It is a pity that people give up on life so easily. Let us me responsible for ourselves and our lives. So many beautiful souls have walked this wonderful planet. Learn that life is beautiful and it has a loads to offer. Learn to let go of things that are not in your hands. Let there be harmony within so that it can be given back. Trust me, you can recover from anything. Nature heals."