Home » news » politics » Scotland move towards Independence And Form as a new country...!!

Scotland move towards Independence And Form as a new country...!! 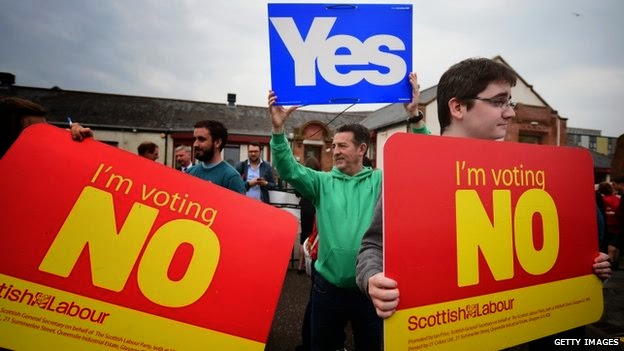 “There’s only one poll that matters, and that’s on 18 September.” The line from Downing Street on Sunday was staid, predictable, and – at one level – true. At another level, the publication of the first independently commissioned poll predicting the dissolution of the union matters very much. It has electrified a passionate debate within Scotland, and woken the wider UK up to the real questions hanging over its future. The Queen herself, whose one current job could soon be split in two, is reportedly uneasy. Over 10 fateful days, the grave issues raised on both sides of the border ought now at last to be debated with the urgency that they demand.

The YouGov survey predicting a 51%-49% yes vote is only one of many, and it could be wrong. While YouGov has uncovered an apparent tide of separatist sentiment over four surveys since early August, its competitor Panelbase has just released another survey recording no change over this period. This recorded a continuing slim advantage for the noes, even though it was commissioned by the yes campaign, and was widely rumoured (or spun) to be set to take them into the lead. All polls are subject to random fluctuations, and more systematic biases affecting the types of people who get involved with internet panels, or for that matter pick up the phone. Then there are special problems in forecasting a one-off referendum, since – by contrast with a general election – the political mix of respondents cannot be calibrated on the strength of how respondents say they voted last time.

So known unknowns abound: this is almost as frightening a time to be a pollster as it is a unionist politician. But through the buzz of individual surveys, there has been movement in the swarm, ever since the nationalist first minister Alex Salmond came out on top in the second TV debate with Better Together’s Alistair Darling. The overall average advantage for the noes has narrowed, with the previously strong unionist majority among women and Labour voters being particularly squeezed.

The no campaign must somehow prevent its inescapable anxiety from morphing into fear and loathing. Mr Darling’s unfortunate complaint about his faltering Sky News earpiece on Sunday – “I’ve lost it” – may be mercilessly recycled, but his campaign needs to keep calm and ask frank questions about why it isn’t doing better, and without turning in on itself. It needs, in particular, to reflect on its obsessive focus on future currency arrangements, which appears to have done little good.

Nationhood is always about emotion as much as calculation, and Scots have not reacted enthusiastically to an unpopular front of Westminster parties telling Scots that they’d lose the pound along with the union. Whatever the economics, and the SNP’s proposed currency union is fraught with technical difficulties, it came across as bullying. Most yes supporters are convinced that London is bluffing. Better Together also needs to avoid the appearance of panic. George Osborne spoke on Sunday about devolving more tax and borrowing powers, and even though much of this is already agreed, few will believe that it was always the intention to be revealing new details into mid-September.

The yes side will be less inclined to readjust than to ride the seeming wave. But Scotland will not be well-served by its recent tendency to answer the negativity of the noes with a little fear-mongering of its own, notably over the NHS. As the Scottish nation grasps that it really could soon go it alone, it will interrogate pressing practical questions about transition, such as over EU membership. Yes should concentrate on giving such reassurances as it can here. And as Britons outside Scotland finally face the existential implications of this month’s vote, questions about where disunion would leave the political structures, the standing and, indeed, the prime minister of the residual UK are beginning to be asked.

Not before time. With days to go, it is not only one country but four that must grapple with the huge stakes involved in divorce.