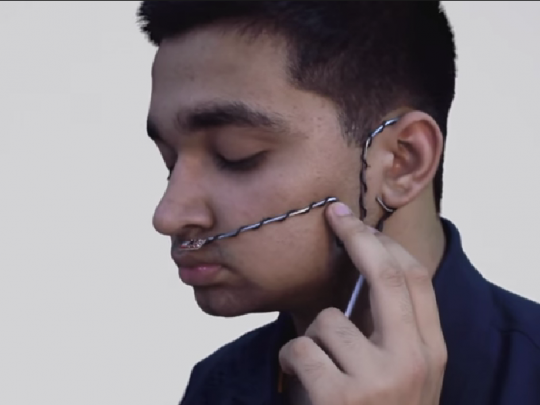 Arsh Shah Dilbagi, a 16-year-old from Panipat, has entered the Google's Global Science Fair as the only finalist from Asia this year for developing a device that helps people with developmental disabilities, like Locked-In Syndrome and ALS, communicate, using only their breath.

The device, called 'TALK', uses signals from a person's breath via Morse code, picked up by a sensor, and then converts them into speech. Dilbagi, a student of DAV International School, Panipat, says the device even allows almost entirely speech impaired and paralyzed people to communicate like never before.

Claiming to have built the world's fastest and cheapest Augmentative and Alternative Communication (AAC) device, a kind used by physicist Stephen Hawking, Dilbagi says it is not possible for all those who have motor-neuro disabilities to afford an AAC device that costs $7,000 (Rs 4.26 lakh).

"AAC devices available in the market are very expensive, slow, bulky and not generic. I decided to find a better solution — an AAC device which is faster, portable and generic and costs only $80 (Rs 5000), making it affordable to the large population," he explains.

The young innovator says that TALK expects a person to be able to give two distinguishable exhales with varying intensities, for converting them into electrical signals using a microphone. The signals are processed by a microprocessor, called the 'Morse engine', which labels the short exhales as 'dots' and longer exhales as 'dashes'. These are further interpreted through the Morse code which converts the signals into words and then sends them to another microprocessor for synthesizing them into voice. According to Dilbagi, TALK features two modes - one to communicate in English, and the other to give specific commands and phrases. These are communicated in nine different voices enabled according to gender and age.

Making two major breakthroughs; increasing the speaking rate, and becoming the world's most affordable AAC device, TALK has landed the young prodigy as the only finalist from Asia in Google's Science Fair Challenge.

"I even got predicted results by testing the device on a person suffering from encephalopathy (global brain dysfunction) and Parkinson's disease," he has claimed in his proposal to Google.

He adds, "In future, I would like to add auto-predictions to my computing engine and integrate TALK with modern technology like Google Glass to make it easier for people with development disabilities."

Dilbagi's father, Amit, said, that since childhood his son had dreamt of doing something meaningful for mankind.

"His attention has always been towards applied science projects. I will request Prime Minister Narendra Modi and Union health minister Harshvardhan to consider this project for the countless people in need for such a device in our country," he told