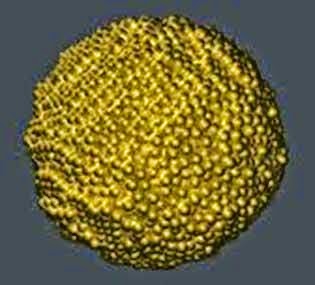 Researchers at the University of Missouri have successfully created radioactive nano particles that can easily investigate lymphoma tumour cells in the Human body. The nano particles are made up of a radioactive form of the element lutenium.
Michael Lewis, an associate professor of oncology in the MU College of Veterinary Medicine, said being able to target secondary tumours is vital to successfully treating patients with progressive cancers.
“Depending on the type of cancer, primary tumours usually are not the cause of death for cancer patients,” Lewis said. “If a cancer metastasises, or spreads creating hard-to-find tumours, it often becomes fatal. Having a way to identify and shrink these secondary tumours is of utmost importance when fighting to save people with these diseases,” Lewis said.
The scientists covered the lutetium nano particles with gold shells and attached targeting agents. In previous research, Lewis has already proven the effectiveness of similar targeting agents in mice and dogs suffering from tumours.
In that research, the targeting agents were attached to single radioactive atoms that were introduced into the bodies of animals with cancer. The targeting agents were able to seek out the tumours existing within the animals, which were then revealed through radio-imaging of those animals.
In the current study, researchers showed that the targeting agents can deliver the new radioactive lutetium nano particles to lymphoma tumour cells without attaching to and damaging healthy cells in the process.
J David Robertson, director of research at the MU Research Reactor and professor of chemistry in the College of Arts and Science, said this is an important step toward developing therapies for lymphoma and other advanced-stage cancers. “The ability to deliver multiple radioactive atoms to individual cancer cells should greatly increase our ability to selectively kill these cells,” Robertson said.