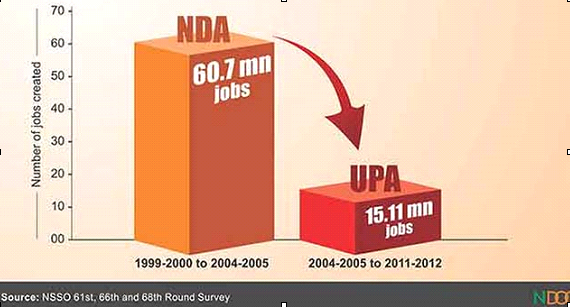 “I have taken over the reins of the country at a time when there is nothing left behind by the previous Government. They left everything empty. The country’s financial health has hit rock bottom and that needs immediate attention,” Modi said, addressing BJP workers in Goa last Saturday.

According to an Economic Times report, the Prime Minister is likely to adopt some tough measures to put the economy, which has been completely derailed in the last one decade, back on track. These steps will largely be based on various reforms ranging from fuel subsidy to fertiliser subsidy, tax reform to labour reform and many more. Reports also suggest that key Bills like Food Security and Land Reforms Bills may be tweaked to make it better and more beneficial for people. Revamping the cash-strapped Indian Railways is also on the top of the agenda of Modi Government.

It will however, be difficult to give fuel subsidy at the moment with oil prices touching a record high because of civil war in Iraq, various options can be looked into to get things going. Modi has always believed that if something like a reform or policy is in the interest of country, it has to be executed. This is unlike the UPA which was more interested in maintaining ‘coalition dharma’ at the cost of what had to be done.

Because of the policy paralysis of the previous Government, our economy is in disarray and needs immediate attention. The previous Government, led by economist Manmohan Singh, left the Indian economy in a shambles and the data tells it all. GDP is hovering at an all-time low of 5 per cent, retail inflation is touching the sky at an average 10 per cent of two years and investment sentiment is completely broken.

In the backdrop of the current state of the economy, the Modi Government has to definitely do a lot to turn things around. But the NDA’s record speaks volumes about its ability to bring about the change it promised.

Modi has shown apprehension that his tough measures might displease some sections of society but at the same time he has expressed confidence that people will praise him once things are set right again. He has reiterated his belief time and again that whatever he does will be in the best of interest of the country.

Take a look at the series of incidents that occurred in the last fortnight (the Government has not yet completed a month). Ask any bureaucrat what he thinks about Modi — will he be able to make things happen? Our babus seem to say yes.

Although nothing really tangible has been achieved till now, robust homework has been done to set things right.

On the economic front, the PMO has asked various Ministries to come up with strategies so that an economy in disarray can get a spur. Suggestions have been invited about how to boost investment sentiment in the country and how eroded confidence of global investors can be restored.

FDI options are being toyed with in the Defence sector, Railways and infrastructure. Reports suggest that FDI in Defence is likely to be increased from 26 per cent to 100 per cent.

To monitor progress in stalled projects of UPA, the Prime Minister’s Project Monitoring Group (PMG) has been formed. According to a Business standard report, a total of 152 projects worth Rs 5.3 lakh crore have already been cleared. This would definitely prove to be a big morale booster for sagging investment sentiment.

In a bid to bringing in governance directly to the people and usher in greater accountability in system, Modi Government has recently abolished all Empowered Groups of Ministers and Groups of Ministers set up during the previous UPA Government. Unlike the previous Congress, which had kept process of governance under wraps, Modi has set his 100-day agenda and directed all his Ministries to get cracking in a time-bound manner. This speaks volumes about the new Prime Minister’s true intentions.