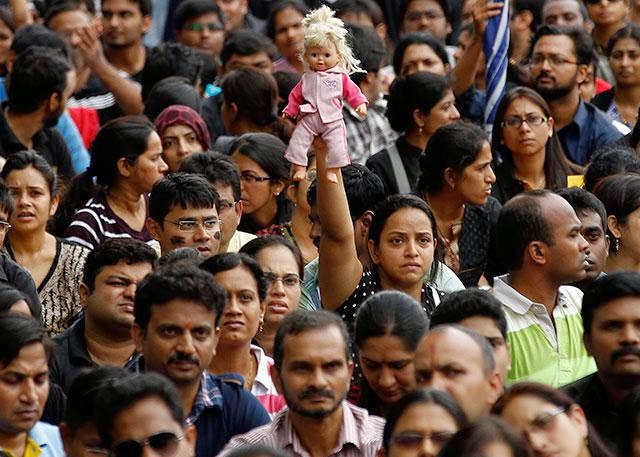 A parent holds high a doll belonging to her child as she participates in a protest against alleged police inaction after a six-year-old was raped at a school, in Bangalore on July 19, 2014. More than 4,000 parents and relatives of children who attend the school shouted slogans against the school’s administration on Saturday demanding that police arrest those involved in the July 2 incident, which was reported only this past week. (AP Photo by Aijaz Rahi)

A few days after the rape of a six-year-old girl at a high profile school in Bangalore shook the entire nation, came a comment from the Chief Minister of Karnataka Siddaramaiah himself. He said, “Except that, don’t you have any other issue?” Earlier too, the Chief Minister had courted controversy when he was seen sleeping in the Assembly during a debate on increasing sexual violence against women. This insensitive comment is unbecoming of Siddaramaiah, whose State Karnataka is currently reeling under a spate of crimes against women. However, this insensitive behaviour from a political class does not come as a surprise. In the past too, several prominent leaders have mouthed off in a similar way, indicating political apathy towards women and their issues. After hearing some atrocious statements from Samajwadi Party chief Mulayam Singh Yadav and TMC MP Tapas Pal, the next politician to join the bandwagon is former Governor of Uttar Pradesh, Aziz Qureshi who recently said, “Even god cannot stop such crime from taking place in Uttar Pradesh.” These statements show insensitivity not only to the survivors but against the society too. In fact, it shows that gender discrimination runs deep in the society.

It is also true that while such comments have caused widespread outrage, but no action has been taken against people who indulge in crass use of language. For instance, despite attracting criticism from various quarters over his “boys will boys” jibe, Mulayam Singh Yadav remains unapologetic. It is high time all these political leaders and so-called caretakers of society realised they can no longer ignore the surge in crimes against women if they have to keep their boats sailing. The Congress lost the general election due to the mishandling of the December 16, 2012 gangrape case. This must compel politicians to take a lesson or two in gender sensitivity.

According to a UN report – Global Study on Homicide, UNODC 2013 – India figures third among top 10 countries where the highest number of rapes have taken place in 2010, a Times of India report said. Even the Minister of State for Home Kiren Rijiju said that according to UN Crime Trends Survey 2010, the US recorded 85,593 cases of rape in that year followed by Brazil with 41,180 rape cases. A total of 22,172 rape cases were registered in India in 2010, he said.

If these numbers are not enough to ring the bell across the lawmakers in India, then perhaps, data from National Crime Records Bureau (NCRB) can send a clearer message. According to a Times of India report quoting the NCRB report, only 15.3 per cent of cases related to sexual offences against children saw completion of trial in 2013, while the conviction rate for these offences was a low 31.5 per cent. The NCRB report also states that around 85 per cent cases of child rape continue to be pending in various courts throughout India.

The report also highlights the behaviour of parents who have reluctance to bring their victimised children to courts and inability to ensure their anonymity and conflicting testimonies by children scarred by assault are some of the primary reasons why sex crime cases against children tend are increasing day by day. Despite bringing in a stringent law such as ‘The Protection of Children from Sexual Offences Act, 2012 (POCSO)’, there is a surge in sexual offences against children. Most district court complexes are yet to get a dedicated Sessions Court for POCSO or independent special public prosecutors as envisaged under the Act that came into force in November 2012.

According to the NCRB report, on an average, at least 16 children in Delhi suffer some kind of crime on a daily basis. Latest reports show that Delhi registered the maximum number of cases of crimes against children — 6,124. Among the States, Uttar Pradesh topped the list with 9,857 cases of crimes against children while Maharashtra is on the second spot with 8,247 cases. In fact, a recent case of physical abuse that went viral was of a three-year-old child being thrashed by his tutor. If these crimes are not checked in time, then the future of these children looks grim.

A move to disband organisations like National Commission for Women or NGOs dealing with crimes against children will only help the Government to seriously tackle the rising incidences at large because these organisations are toothless and are on the Government and eat tax payers’ money.