Che Guevara was an Argentinean-born..!! 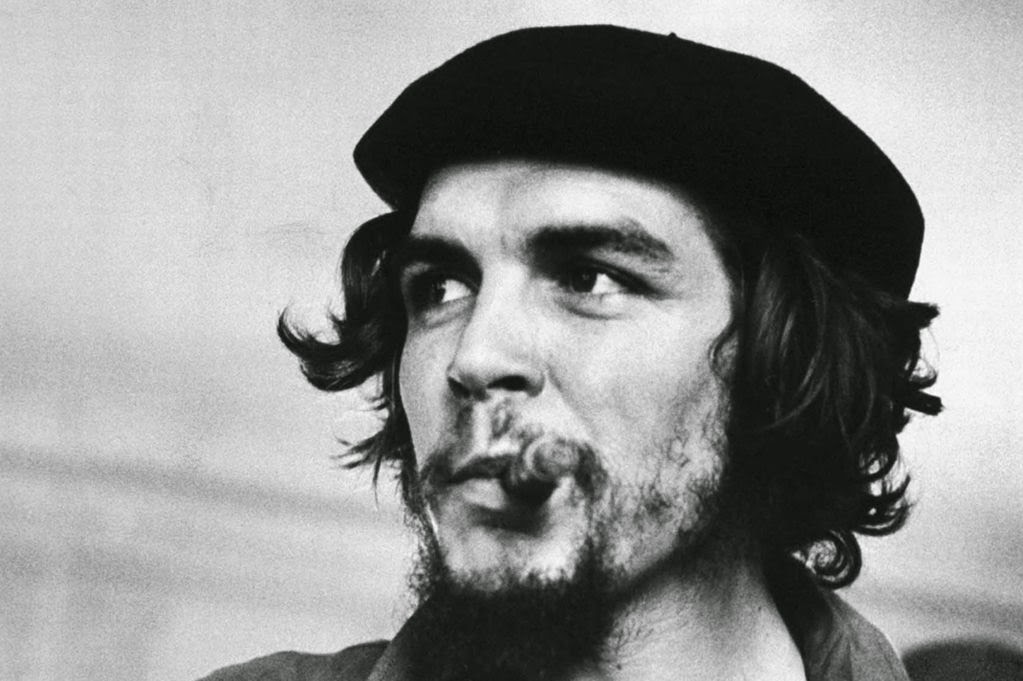 Che Guevara was an Argentinean-born, Cuban revolutionary leader who became a left-wing hero. A photograph of him by Alberto kora became an iconic image of the 20th century. Ernesto Guevara de la Serna, known as Che Guevara, was born on 14 June 1928 in Rosario, Argentina into a middle-class family. He studied medicine at Buenos Aires University and during this time travelled widely in South and Central America. The widespread poverty and oppression he witnessed, fused with his interest in Marxism, and convinced him that the only solution to South and Central America's problems was armed revolution.
In 1954 he went to Mexico and the following year he met Cuban revolutionary leader Fidel Castro. Guevara joined Castro's '26th July Movement' and played a key role in the eventual success of its guerrilla war against Cuban dictator Fulgencio Batista.
Castro overthrew Batista in 1959 and took power in Cuba. From 1959-1961, Guevara was president of the National Bank of Cuba, and then minister of industry. In this position, he travelled the world as an ambassador for Cuba. At home, he carried out plans for land redistribution and the nationalisation of industry.
A strong opponent of the United States, he guided the Castro regime towards alignment with the Soviet Union. The Cuban economy faltered as a result of American trade sanctions and unsuccessful reforms. During this difficult time Guevara began to fall out with the other Cuban leaders. He later expressed his desire to spread revolution in other parts of the developing world, and in 1965 Castro announced that Guevara had left Cuba.

Guevara then spent several months in Africa, particularly the Congo, attempting to train rebel forces in guerrilla warfare. His efforts failed and in 1966 he secretly returned to Cuba. From Cuba he travelled to Bolivia to lead forces rebelling against the government of René Barrientos Orton. With US assistance, the Bolivian army captured Guevara and his remaining fighters. He was executed on 9 October 1967 in the Bolivian village of La Higher and his body was buried in a secret location. In 1997 his remains were discovered, exhumed and returned to Cuba, where he was reburied.
Early life: Ernesto Guevara was born to Ernesto Guevara Lynch and his wife, Celia de la Serna y Lola, on June 14, 1928 in Rosario, Argentina, the eldest of five children in an Argentine family of Basque and Irish descent. In accordance with Spanish naming customs, his legal name (Ernesto Guevara) will sometimes appear with "de la Serna" and/or "Lynch" accompanying it. Referring to Chee’s "restless" nature, his father declared "the first thing to note is that in my son's veins flowed the blood of the Irish rebels".
Very early on in life, Ernesto (as he was then called) developed an "affinity for the poor". Growing up in a family with leftist leanings, Guevara was introduced to a wide spectrum of political perspectives even as a boy. His father, a staunch supporter of Republicans from the Spanish Civil War, often hosted many veterans from the conflict in the Guevara home.
Guevara learned chess from his father and began participating in local tournaments by age 12. During adolescence and throughout his life he was passionate about poetry, especially that of Pablo Neruda, john Keats, Antonio macho, Federico Garcia Lorca, Gabriela Mistral, Cesar Vallejo and Walt Whitman. He could also recite Rudyard Kipling’s and Jose Hernandez’s Martin Fierro from memory. The Guevara home contained more than 3,000 books, which allowed Guevara to be an enthusiastic and eclectic reader, with interests including Karl Marx, William Faulkner, Andre Gide, Emilio Salary and Jules Verne. Additionally, he enjoyed the works of Jawaharlal Nehru, Franz Kafka, Camus, Vladimir, and Jean-Paul Sartre as well as Anatole France, Friedrich Engels, H.G. Wells, and Robert Frost.
As he grew older, he developed an interest in the Latin American writers Horace Quinoa, Caro Algeria, Jorge Picasa, Ruben Dario, and Miguel Asturias. Many of these authors' ideas he catalogued in his own handwritten notebooks of concepts, definitions, and philosophies of influential intellectuals. These included composing analytical sketches of Buddha and Aristotle, along with examining Bertrand Russell on love and patriotism, Jack on society, and Nietzsche on the idea of death. Sigmund Freud’s ideas fascinated him as he quoted him on a variety of topics from dreams and libido to narcissism and the Oedipus complex. His favourite subjects in school included philosophy, mathematics, engineering, Political science, sociology, history and archaeology.
Years later, a February 13, 1958, declassified CIA 'biographical and personality report' would make note of Guevara's wide range of academic interests and intellect, describing him as "quite well read" while adding that "Chee is fairly intellectual for a Latino."

Despite suffering crippling bouts of acute asthma that were to afflict him throughout his life, he excelled as an athlete, enjoying swimming, football, golf, and shooting; while also becoming an "untiring" cyclist. He was an avid rugby union player, and played at fly-half for Club Universitario de Buenos Aires. His rugby playing earned him the nickname "Fuser"—a contraction of El Furibundo (raging) and his mother's surname, de la Serna—for his aggressive style of play.