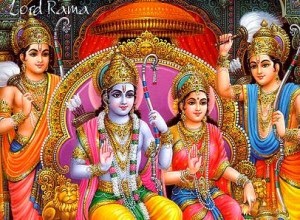 Sri Ramavathar explains guidelines that need to be followed by each and every person in this world. During this Avathaar, Sriman Narayanan incarnates as the son for great king, Dasarathan. But in spite of being born to a great king, throughout this Avathaar, he led his life as an ordinary person.
According to ancient texts, Sri Rama was born to King Dasarada and Kausalya on the Chaitra sudda Navami in Karkataka lagna with Punarvasu fourth pada. This day is being celebrated as Sri Rama Navami. It is the most auspicious day for everyone. According to Valmiki, Sri Rama was born well before BC 2055. As per Indian Standard Time, he was born in Vyvaswata manvantaram Panchama Tretayugam, forth part i.e. Thirty thousand years equivalent Vilambali year Chaitra sudda Navami, Wednesday.

This festival is celebrated for nine days starting from Chaitra sudda Padyami and ends with Navami day, the Jayanti of Lord Rama. During these nine days, Sri Rama Parayanam is recited and Rama Nama is recited in temples and Sri Rama mandirs. According to ancient texts, Sri Rama Navami is celebrated at noon. This festival is being celebrated in different ways across the country. In Maharastra, the celebrate begin right from the morning 9 AM and proceed till 12 noon. People keep a fast throughout the day, breaking it only at midnight with fruit.
Ayodhya, the birthplace of Sri Rama, a big fair is held on this day. In South India the Sri Ramnavami Utsavam is celebrated for nine days with great fervour and devotion. In Bihar and Uttar Pradesh, public gatherings called satsangs are organised to commemorate the birth of Rama. Excerpts from the Ramacharitamanas, extolling the glory of Rama, are recited.
During this day, we clean our house, put the Kolam and place a photo of Sri Ramar Pattabhishekam on top of a wooden plate (Manai). Decorate the photo with various flowers. And now you can perform Archanai for Sri Ramar and after that you can chant some of the slokams from Sri Ramayanam.
Also, you can chant Sri Rama Nama and it is 100% evident that wherever the great Sri Rama Nama is expressed, Hanuman will enjoy that Nama and along with Sri Ramar, he will also bless us with his grace. By chanting the Sri Rama Nama, it is said that bhaktas will get the favour equivalent to that of the favour got by fasting. Not even on this day, even daily we should atleast say the Sri Rama Japa for 108 times (or atleast for 28 times) and we can a lot of positive changes on our life.

In Andhra Pradesh, Sri Rama Kalyanam is celebrated on Navami day. Devotees witness the wedding celebrations of Lord Rama with Sita. According to ancient texts, Sri Rama Vanavasam was done in this State. The Kalyanotsavam is being celebrated with utmost glory and pomp at Sri Bhadrachalam temple. Devotees from various parts of the country will throng the temple to witness the Kalyanotsavam. The Government of Andhra Pradesh will present pearls and wedding dress material to Lord Rama and Sita. In this temple, the festival is celebrated for five days ie., Navami, Dasami, Ekadasi, Dwadasi, and Trayodasi. During these days, devotees chant Sri Rama Nama.