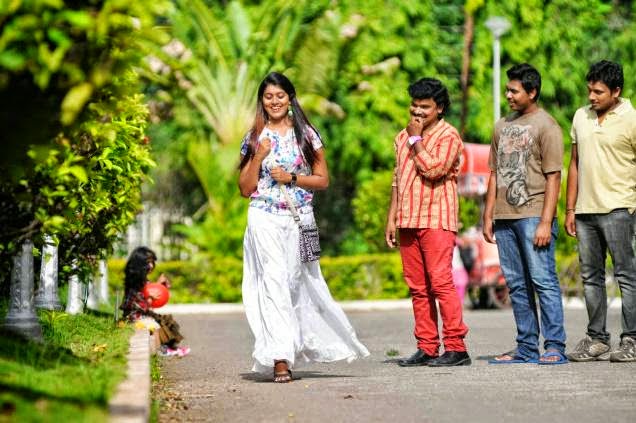 Director Steven Shankar said he had no major expectations from the movie but the mystery kept the hype on. Hrudaya Kaleyam’s online sneak-peek was not a case of momentary excitement over the trailer. Curious movie-goers kept a close watch on the release of the movie and when it released, it reflects the logic-defying scripts and scenes with powerful dialogues.
For once Hrudaya Kaleyam isn’t a poor boy-meets-rich girl story. Nor is it a triangular love story or story of faction heroes. Hrudaya Kaleyam is an out and out spoof on the hero-worshiping culture that exists in our film industry.
A laugh-riot from scene one, the actor’s introduction happens in the rain with a ‘statutory warning: getting wet in the rain isn’t good for health.’ From there on there isn’t a dull moment in this movie which is full of a debut cast. The hero Sampoornesh Babu, or Sampoo as he is fondly called, is a thief the city and the state police are on the lookout for. The mastermind criminal leaves no clues behind. When they go to break a shop, the group is shocked to see a lock ‘Made in Thailand.’ Enter Sampoo and he says “It could be made in China or made in Thailand, the brain of an Indian can crack anything.” The theatre reverberates with claps and whistles.

For some reason he and his gang utilises electricity to break open shops and departmental stores and steals ready-to-eat food packets, pickles, mosquito coils etc. The siren of the police jeeps alerts the group and they disperse. In the meantime Sampoo suspects a breach of trust and reels off heart-wrenching dialogues. The group member who has leaked the information falls at his feet and says, “I gave information to Black Mamba, not to police, because Black Mamba first caught me, then caught my collar and then my throat.” Black Mamba happens to be a contract killer whose target is Sampoo. Sampoo tells his accomplice: ‘Mamba nannu vethakatledu, chaavu ni vethukuthunnadu.’
This unfolds a flashback and it turns out that Sampoo the thief, was originally an electrician, an orphan living on the railway platform, drinking water to quench his thirst and begged for toothpaste from people saying he would brush his teeth but in reality that’s his food.
Sampoo falls in love with Nilu, does a song and dance complete with robot steps but only to be spurned by his ladylove for not respecting Indian culture and glorifying western dance. She says she would love a man who is 99.9 percent a ‘real man.’ Dejected, he hangs out in a place where a few men are discussing their problem with software and computers. Sampoo comes to their rescue and discovers Samputer 1.25 that is powered by turmeric whose antiseptic properties kill viruses that corrupt software and hardware. Sampoo’s dance steps with two left feet too come with a ‘statutory warning’, and the audience loves it. After a few more scenes and breathless dialogues, Sampoo’s lover is almost killed by Black Mamba and needs a new heart. The director doesn’t disappoint us, Sampoo takes the challenge after offering his own heart. But the doctor responds: “Gunde arigina gundi kadu.”
This brings us to the climax.
While the audience laughs and claps at the spoof, the movie disappoints in the acting skills. The audience seemed oblivious to it though. All actors appear very raw. Some scenes looked straight out of a low budget slow Telugu TV serial. The director seems to have handled the situation well, with one after another clichéd scenes comimg with a pun. The director has smartly avoided making the movie a spoof to belittle the Telugu movie industry and larger-than-life heroes. It’s just a fun take on typical masala movies.
Genre: Spoof Comedy
Cast: Sampoornesh Babu, Ishika Singh, Kavya Kumar, Mahesh Kathi, Rajesh Sompalli, Krishna Aditya and Sai Rajesh
Director: Steven Shankar
Music Director: Srikanth Pendyala
Bottomline: Go for a few good laughs without expecting any great acting skills.