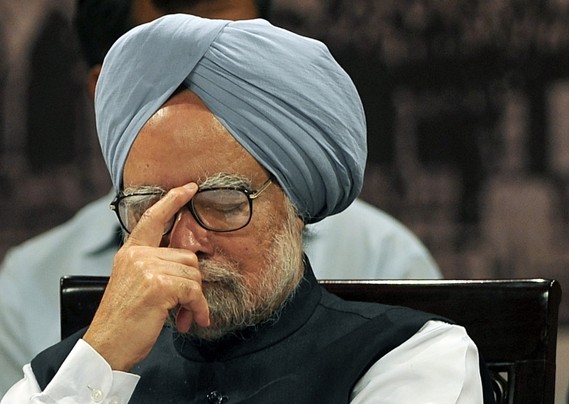 In the middle of an election that is expected to deliver one of the worst results ever for the ruling Congress party, the Prime Minister's office today rebutted allegations that Dr Manmohan Singh has failed to provide strong leadership by being uncommunicative and reticent about sharing his views.

"In the last five years, there has not been much scope for the PM to speak in Parliament," said his media adviser Pankaj Pachauri. The Congress has blamed the opposition BJP for paralyzing Parliament with protests over a range of issues including an alleged scam in the allocation of coal mining licenses. "In the last 10 years, the PM has made a speech every three days," Dr Singh's aide said.

The clarifications come as the BJP, expected to win the maximum seats in the election, is projecting its prime ministerial candidate Narendra Modi as a dynamic leader who can revive India's economy and create jobs. Mr Modi's campaign has presented him as the sort of politician who cuts through red tape to make quick and effective decisions.

The Congress campaign is being fronted by Rahul Gandhi, the party's young vice-president whose mother Sonia is president. In the last two weeks, two books by former insiders in the PM's administration have offered damning accounts of his leadership.

Sanjaya Baru, a former media adviser, has suggested in his book that the PM was an ineffective leader whose authority was repeatedly undermined by Mrs Gandhi, who called the shots.

PC Parakh, former Coal Secretary, has said that the PM failed to take on vested interests which allowed a massive swindle embedded in coal licenses, which were allocated without a transparent bidding process.