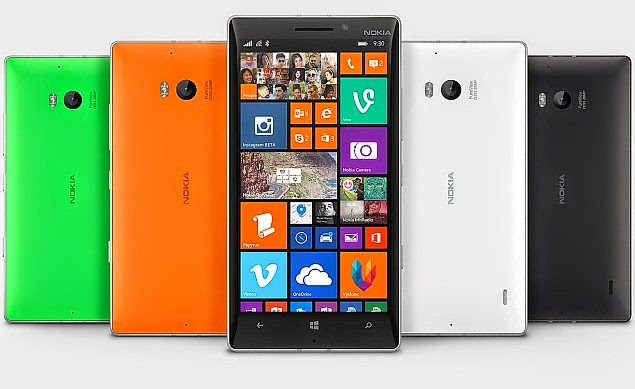 Microsoft unveiled its big Windows Phone 8.1 update earlier today, and Nokia followed up with two new handsets running the software. The Lumia 630 is the first Windows Phone 8.1 device to use on-screen buttons, and Nokia’s Lumia 930 is the global version of the Lumia Icon. Both are designed for the latest Windows Phone 8.1 update, and will be available in the coming months. At a Nokia event in San Francisco I got a chance to get a closer look at both handsets.
Nokia’s Lumia 930 is effectively a carbon copy of the Lumia Icon. It has the same 5-inch 1080p display, Snapdragon 800 processor, and includes a 20-megapixel PureView camera with a Zeiss lens. It even looks the same, with a rectangular body and metallic sides that makes it feel slightly weighty in the hand. The real visual difference here is that Nokia has added color to the rear of the device in either orange, green, white, or black. The colors really pop at the back of the device, but they're barely noticeable from the front.
Otherwise, it’s a Lumia Icon for the rest of the world with the best specifications on a Windows Phone and a great display. While it’s not the prettiest Lumia, and it’s still a little heavy, it’s really the only option if you want the best of what Windows Phone 8.1 has to offer right now. Hopefully Nokia can cram these hardware specifications into a better design in future, perhaps a Lumia 925-style handset with the same camera as the Lumia 930.

The second handset of the day is the Lumia 630. It’s the next low-cost addition to the Lumia family, with a 4G version, dubbed the Lumia 635, also available. The only differences between the two are the connectivity and the availability of glossy removable covers on the Lumia 635. Nokia’s Lumia 630 uses on-screen buttons in Windows Phone 8.1 and the option for dual-SIMs, the first handset to do so. It’s an odd experience if you’re used to the capacitive buttons typically found on Lumia handsets, but it’s a welcome addition that reduces some of the clutter and still includes haptic feedback. The dual-SIM support works in Windows Phone 8.1 by splitting out the phone dialer and messaging into two separate Live Tiles. There's an option to combine the two, much like how email accounts can be combined, but most will use these separately with the individual SIMs. 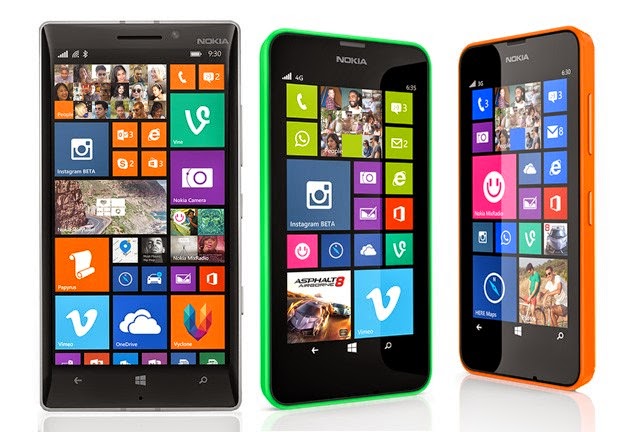 Both devices have a 4.5-inch display with Snapdragon 400 processors. As they’re both low-cost, you’re only going to get 512MB of RAM and 8GB of storage. Thankfully, there’s a microSD slot to expand the storage side, and Windows Phone 8.1 will now let you store apps, music, photos, and movies on the microSD storage. The Lumia 630 looks a lot like its previous counterpart, the Lumia 620, but the sides have been angled slightly. It doesn’t feel heavy or cheap, and for $159 it seems like a reasonable handset in that range. It also looks similar to Nokia’s Android X handsets with the particular color choices the Finnish smartphone maker is using here. This is Nokia’s next attempt at a low-cost device designed for the masses, and it will likely help with its strategy of pushing handset volumes and the overall growth of Windows Phone.