TRS not going to merge with Congress says KCR


K Chandrasekhar Rao, the man who fronted the campaign for a new southern state of Telangana, has turned down a merger between his party and the Congress ahead of the national election, due by May. Senior leaders from his party who met with him this evening said an alliance with the Congress has not yet been ruled out. 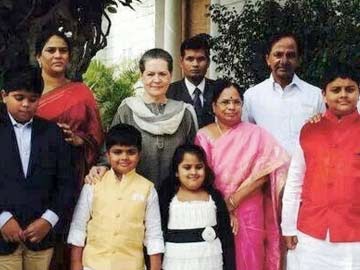 "Five-member panel will decide on possible alliances... Can support the Congress to form government after the elections," Mr Rao said this evening.

Mr Rao, 60, heads the Telangana Rashtra Samithi or TRS. In 2009, it was his 11-day fast that resuscitated a movement that for decades asked the bifurcation of Andhra Pradesh and the carving out of the Telangana region as its own state.

Seeking to profit in the national election, the Congress recently managed to push through the law that makes Telangana the country's 29th state. Sources say that the party, which privately considers Mr Rao an unreliable ally, wanted to confirm a merger immediately.

Last week, senior union minister Jairam Ramesh conceded that the reorganization of Andhra Pradesh will not take place before the election. Mr Rao's party is irked by the delay because it says it deprives him of electoral dividends for a cause he has brought to fruition.

Sources also say that the Congress had refused to guarantee that if the parties merged, Mr Rao would be made the chief minister of the new Telangana state.

Mr Rao is reportedly upset with the fact that two prominent rebels from his party were accepted last week by the Congress as members. Senior leaders close to him say that the TRS will benefit from maintaining its own identity in the election rather than as an annex of the Congress.

Last week, the Congress lost another important regional ally - Ram Vilas Paswan in Bihar. He decided to side with the BJP in the coalition it anchors, the National Democratic Alliance or NDA.