A+ A-
Print Email
Let us see what is wireless hosted network, how to create it in windows with simple commands.

What is virtually hosted network?


Though the Virtual WiFi project disbanded before the feature was fully implemented, Microsoft has included some of the underlying functionality in Windows 7 and Windows Server 2008 R2. Microsoft coined the name,wireless Hosted Network, for this new feature.

Some times you need Connectify, similar tools to create hotspot to share your PC's internet connection over Wifi.
But you can set up this in windows 7 (Windows 8 has problems with sharing networks)  without using any third party tools.


Getting started with wireless Hosted Networks:

In order to use the wireless Hosted Network feature, your wireless adapter must be using drivers certified for Windows 7. If Windows detects a supported adapter, it will automatically add a connection to the Network Connections window, named Microsoft Virtual WiFi Miniport Adapter, such as Figure 1 shows. If multiple supported-adapters exist, Windows will automatically choose the one to use for the wireless Hosted Network. 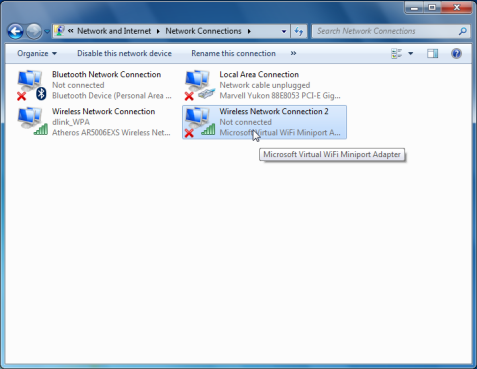 Fig.1
Microsoft requires all wireless Hosted Networks to use WPA2-PSK (AES) encryption. However, there is not a mechanism put in place to prevent file sharing. Hosts and clients should manually protect shares if not all users can be trusted.
In addition, keep in mind that wireless Hosted Networks do not automatically restart after the computer resumes from sleep, hibernate, or restarts. However, if used, a third-party utility might initiate a reconnection. If you manually start the wireless Hosted Network again, Windows will use the previously entered network details though.

If you want to experiment with the wireless Hosted Network feature with text commands, click the Start button, enter “cmd” and right click on it and run it as administrator . Once the Command Prompt window appears, you can enter the following to set the network details:
netsh wlan set hostednetwork mode=allow ssid=YourVirtualNetworkName key=YourNetworkPassword  keyUsage=persistent 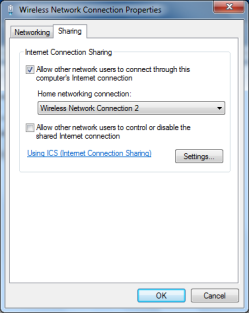 You were left with Command prompt opened.Type there "netsh wlan start hostednetwork"
(see that there is no space between hosted and network.

You will receive message that your hostednetwork started successfully.
(see that hotspot cannot start automatically after restarting computer.)

Hence after restarting use last step as shown in above fig to restart your service again.
(You need not set hostednetwork again and again.)

To manually turn hotspot off use "netsh wlan stop hostednetwork"


To see the Hosted Network details (see Figure 3), including the MAC addresses of connected users, enter the following:

To change the WPA2-PSK key, you can enter the following:

Now others nearby should see the Hosted Network appear in their list of available wireless networks. They can connect like normal and enter the encryption key when prompted.

Remember, you’ll have to manually start the Hosted Network again, if desired, after rebooting the computer. Most importantly, remember sharing isn’t blocked; make sure you only invite people you trust.

There is also  an alternate option that the commands you want to execute can be typed in notepad file and save with extension(.cmd) eg.(hotspot.cmd). Run it as administrator ,it saves your time if you use it frequently.
Let us know if  you face any problems in the process ...