A+ A-
Print Email
Malaysian police are investigating the personal, political and religious backgrounds of the pilots and crew of a missing jetliner, a senior officer said on Sunday, as they try to work out why someone aboard flew the plane hundreds of miles off course.
The government also appealed for international help in the search for the Malaysia Airlines (MASM.KL) plane across two corridors stretching from the Caspian Sea to the southern Indian Ocean, diplomats said. 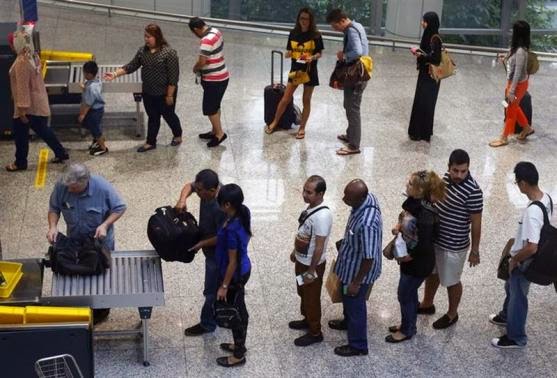 No trace of the Boeing (BA.N) 777-200ER has been found since it vanished on March 8 with 239 people on board, but investigators believe it was diverted by someone who knew how to switch off its communications and tracking systems.
"We are not ruling out any sort of motivation at the moment," a senior police official with knowledge of the investigation told Reuters.
The disappearance of Flight MH370 has baffled investigators, aviation experts and internet sleuths since the plane vanished from civilian air traffic control screens off Malaysia's east coast less than an hour after taking off from Kuala Lumpur en route to Beijing.
At a news conference on Saturday, Malaysian Prime Minister Najib Razak said investigators believed somebody steered the plane west, far from its scheduled route.
Electronic signals it continued to exchange periodically with satellites suggest it could have continued flying for nearly seven hours after being last spotted by Malaysian military radar off the country's northwest coast.
The satellite data revealed by Najib suggests the plane could be anywhere in either of two arcs: one stretching from northern Thailand to the border of Kazakhstan and Turkmenistan, or a southern arc heading from Indonesia to the vast southern Indian Ocean.
A source familiar with official U.S. assessments said it was thought most likely the plane had headed south into the Indian Ocean, where it would presumably have run out of fuel and crashed. Air space to the north is much busier, and the plane would likely have been detected.
Underlining the scale of the task ahead, Malaysian officials listed more countries they were contacting for assistance in searching along the two arcs, which they said were of equal importance.
They range from the former Soviet central Asian republics to the north to Australia in the south, along with France, which administers a scattering of islands deep in the southern Indian Ocean uninhabited except for a handful of researchers.
The Indian Ocean is one of the most remote places in the world and also one of the deepest, posing potentially enormous challenges for efforts to find wreckage or the flight voice and data recorders that are the key to solving the puzzle.
PILOTS' HOMES SEARCHED
Najib said that in light of the mounting evidence that the plane was deliberately diverted, the investigation into the aircraft's crew and passengers would be stepped up.
Within hours, special branch officers had searched the homes of the captain, 53-year-old Zaharie Ahmad Shah, and first officer, 27-year-old Fariq Abdul Hamid, in middle class suburbs of Kuala Lumpur close to the international airport.
An experienced pilot, Zaharie has been described by current and former co-workers as a flying enthusiast who spent his off days operating a life-sized flight simulator he had set up at home.
The Transport Ministry said experts were examining the simulator but appealed to the public "not to jump to conclusions regarding the police investigation".
The senior police official said the flight simulator programmes were looked at closely, adding they appeared to be normal ones that allowed players to practice flying and landing in different conditions.
Postings on his Facebook page suggest the pilot was a politically active opponent of the coalition that has ruled Malaysia for the 57 years since independence.
A day before the plane vanished, opposition leader Anwar Ibrahim was convicted of sodomy and sentenced to five years in prison, in a ruling his supporters and international human rights groups say was politically influenced.
Asked if Zaharie's background as an opposition supporter was being examined, the senior police officer would say only: "We need to cover all our bases."
Malaysia Airlines has said it did not believe Zaharie would have sabotaged the plane, and colleagues were incredulous.
"Please, let them find the aircraft first. Zaharie is not suicidal, not a political fanatic as some foreign media are saying," a Malaysia Airlines pilot who is close to Zaharie told Reuters. "Is it wrong for anyone to have an opinion about politics?"
Co-pilot Fariq was religious and serious about his career, family and friends said, countering news reports suggesting he was a cockpit Romeo who was reckless on the job.
EXPERTS DOUBT MILITANT GROUPS INVOLVED
No details have emerged of any passengers or crew with militant links that could explain a motive for sabotaging the flight.
Southeast Asia's homegrown Islamist militant groups, such as Jemaah Islamiah (JI), which carried out the Bali bombings in 2002, have been quiet in recent years after security forces either arrested or shot dead numerous members.
Experts said they doubted the remaining militants had the skills or capabilities to carry out a complex hijacking.
"JI has not been involved with violence in the region since 2007," said Sidney Jones, director of the Jakarta-based Institute for Policy Analysis of Conflict.
"The other groups that are active in Indonesia, in trying to make terrorist plots, are all not very competent. I would be extremely surprised if any group from Indonesia, the Philippines or Malaysia itself would be directly involved."
Malaysia said the latest analysis of satellite data showed the last signal from the missing plane at 8:11 a.m. local time, almost seven hours after it turned back over the Gulf of Thailand and re-crossed the Malay peninsula.
The data did not show whether the plane was still flying or pinpoint its location at that time, presenting searchers with a daunting task. Seven hours' more flying time would likely have taken it to the limit of its fuel load.
India had been searching in two areas, one around the Andaman and Nicobar Islands and a second further west in the Bay of Bengal, both in the direction the plane was heading when it dropped off Malaysia's military radar. Both searches have been "paused" awaiting further instructions from Malaysia, defence officials said on Sunday.