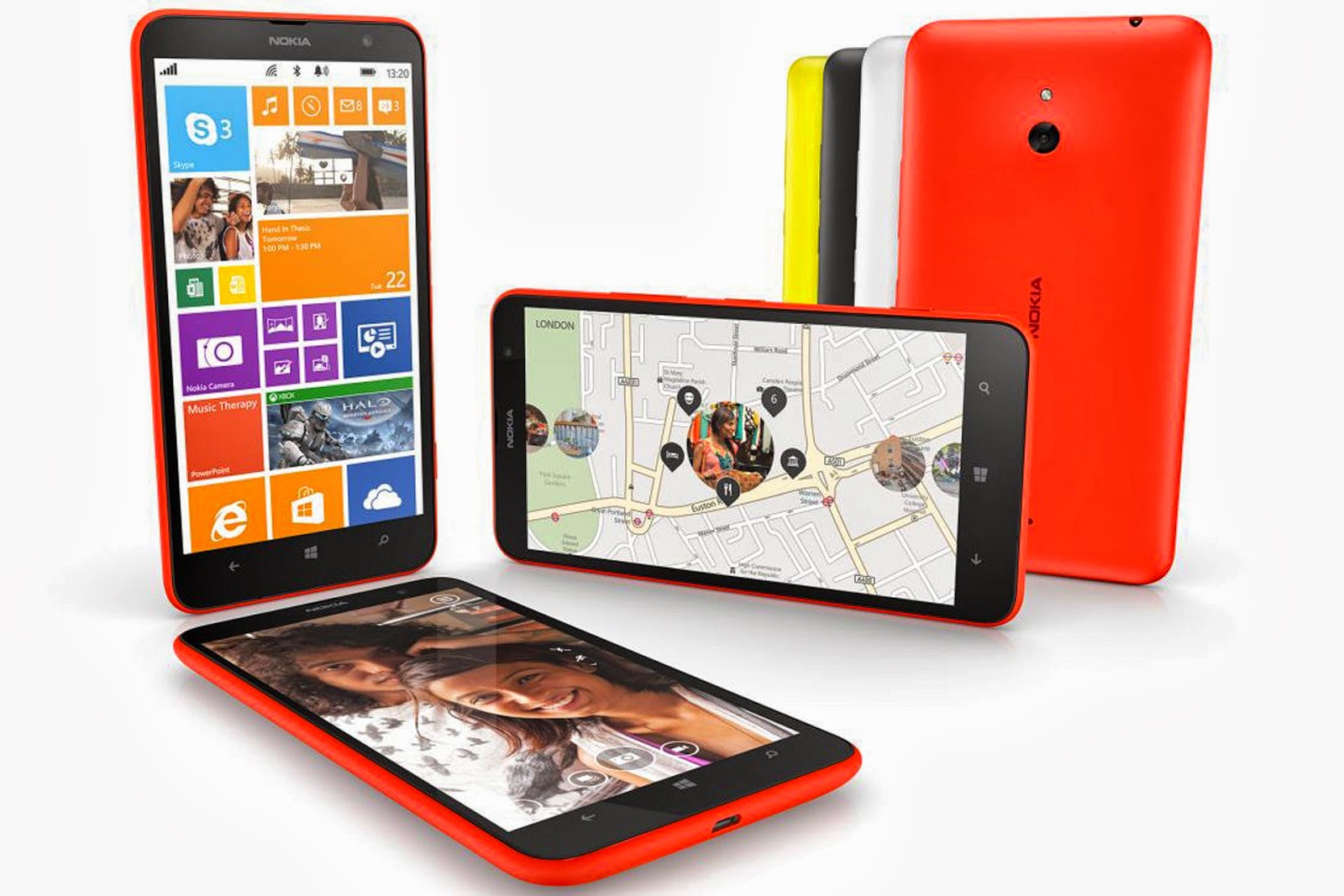 Nokia's Lumia series is diversifying into many different shapes and sizes. The 1320 is a 6-inch phablet that's a similar size to the 1520 high-ender, but with enough compromises to allow Nokia to sell it for around half the price.
It's on sale now free on contracts of around £20 per month.
Design
It's a similar size to its classier cousin, and also available in several colours, but it's a little thicker and heavier, with more rounded corners (the corners are definitely a bonus).
Like the 1520 it also has the new, three-column layout of the Windows 8 Metro interface, which makes better use of the screen's size. And big as it is, that screen is no slouch. It drops the HD resolution to 1,280x720p (245ppi) but still looks beautifully sharp and vibrant, with excellent viewing angles. You can also set up the Glance screen, which offers you the time and any message updates you may have received while your phone is on standby.
The touch-sensitive Windows Start, back and search buttons beneath the screen aren't backlit though, which seems a bit weird and makes them hard to find in low light.
Processor and features
Instead of the 1520's quad-core engine, the 1320 sports a dual-core processor clocked at 1.7GHz and backed by a single 1GB of RAM. That would add up to a fairly middling performance on an Android device, but Windows 8's stripped down interface and architecture mean that this device still feels very fast indeed, whipping between apps in a trice. You won't find the same abundance of HD games in the Windows Store as you'd expect from Google Play or the iOS App Store, but what there is can certainly be handled by the 1320. Our AnTuTu benchmark test gave it a score of 13,546, which puts it well behind the 1520, but it coped very well indeed in practical use.
This being Nokia, there are some useful extras with the likes of Nokia MixRadio and Xbox Music, as well as HERE Maps, HERE Drive sat nav and Kids Corner, which lets you set aside an area of the phone with particular apps for curious youngsters. Oh, and there's a full version of Microsoft Office -- very handy on a device this size since you might actually be able to do some real work on it.
Photography
The 5-megapixel camera does without the Carl Zeiss lens and many of the extras we've come to expect on higher end Nokias. But it's quick to load up, includes autofocus and flash, and picture quality is decent too. Which is pretty much all your casual snapper really cares about.
There's 8GB of memory on board, a big step down from the 1520's 32GB, though fortunately you can add more via microSD card.
The large size of the casing allows room for a big ol' battery, and the 3,400mAh model under the hood didn't disappoint, still going after two full days of steady use.
Conclusion
It's big, but its fast. It comes with useful extras like Nokia MixRadio and HERE Drive but it's app store is severely limited. The Nokia Lumia 1320 is an intriguing mix of contradictions but it's a case of horses for courses. It's a good performer and certainly worth a look -- the only real drawback compared to similar Android devices is the understocked app store.