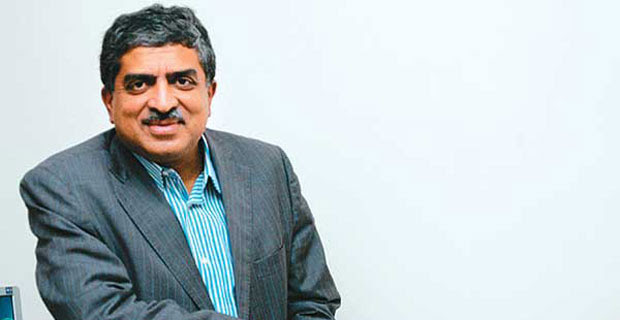 Nandan Nilekani also known as the man behind the IT boom is an Indian entrepreneur, technocrat and educationist, who is currently the Chairman of UIDA, the Unique Identification Authority of India. He is the member of the Board of Governors of the IIT, the Indian Institute of Technology. Along with that he is the head of TAGUP (Government of India’s technology committee).
Nandan Nilekani was born on 2nd June 1955 in Sirsi, Karnataka in India. Most of Nandan’s childhood was spent in Bangalore where he attended the Bishop Cotton Boys School. Because of his father’s job the family had to relocate often thus Nandan had to change schools frequently. In Dharwar, he went to St. Joseph’s High School. He graduated in 1978 from the Indian Institute of Technology (Mumbai) with a degree of Electrical Engineering. After his graduation Nandan applied at Patni Computers where his interviewer was N R Narayana Murthy who later became his guide and guru. Upon his resignation from Patni Computers in 1981, the entire division followed suit.
Nandan co-founded Infosys in 1981 that had a humble beginning but saw immense success due to the hard work, commitment and exceptional skills of Nandan Nilekani along with other founders of course that also included his mentor, Murthy. The company became the top most name in the Indian IT industry for the nest twenty years. He contributed to the company on various positions including managing director, president and chief operating officer. In March 2002, Nandan assumed the responsibilities of CEO of Infosys after Murthy left the post. He became the head of UIDA in 2009 as the Cabinet Minister, a post that he still has. He is also the president of NCAER (National Council of Applied Economic Research) and the member of the board of governor of ICRIER (Indian Council for Research on International Economic Relations). He is also on many advisory boards including the Bombay Heritage Fund and the World Economic Forum. Nandan also co-founded NASSCOM and TIE (The Indus Entrepreneurs).
In 2006, he was listed amongst the world’s 100 most influential people by Times magazine. In 2006 he was given the Padma Bhushan, which is the highest most prestigious honor in India given to a civilian. He was presented an honorary Doctorate of Law by the University of Toronto. He is also the first Indian to have received the ‘Legend in Leadership Award’ by Yale University in 2009 and in 2005 the Joseph Schumpeter Prize for his services to economic sciences, economy and politics. Named ‘Businessman of the Year’ by Forbes magazine Asia, Nandan Nilekani is par excellence as a businessman. His book ‘Imagining India: The Idea of a Renewed Nation’ was promoted by him on John Stewart’s ‘The Daily Show’. He has also spoken on his views on India’s future in a TED conference.
Nandan has a net worth of 1.4 billion dollars. Nandan currently lives with his wife Rohini Nilekani and his children Janhavi and Nihar both of whom have graduated from Yale University.