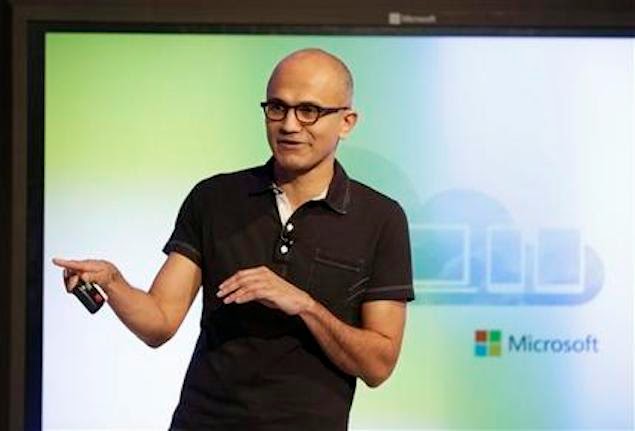 Microsoft has released an iPad version of its popular Office software suite, a breakthrough heralding a new era under a CEO who promises to focus more on the devices that people are using instead of trying to protect the company's lucrative Windows franchise.Thursday's unveiling of the much-anticipated iPad apps for Microsoft's bundle of word processing, spreadsheet and presentation software comes nearly four years after Apple Inc. released the tablet computer that has contributed to a steady decline in sales of desktop and laptop machines running on the Windows operating system.Microsoft's decision to relent to persistent demands to make its top-selling software application available on the world's most popular tablet comes seven weeks after the Redmond, Wash., company anointed Sayta Nadella as its CEO after being led for 14 years by Steve Ballmer.The change in command gives Microsoft Corp. an opportunity to prove it's a more nimble company adapting to evolution of computing instead of clinging to its old ways.Nadella, who has been working at Microsoft for 22 years, emphasized that he felt rejuvenated since taking over as CEO."You see things from a fresh set of eyes and fresh perspective," Nadella told a crowd of reporters gathered in San Francisco for his first major public appearance as CEO.Investors seem to have liked what they have seen so far. Microsoft's stock slipped 43 cents to close Thursday at $39.36, but the shares are still up by 8 percent since Nadella took over. The stock lost about one-third of its value under Ballmer's reign.The Office app for the iPad represents a major step in the right direction for Microsoft, said FBR Capital Markets analyst Daniel Ives. "They finally looked in the mirror and realized they needed to go with the crowd in terms of iPads," Ives said.Like several other analysts, Ives thinks the Office app for the iPad could generate an additional $1 billion in revenue for Microsoft. Although the Office app is free to anyone who wants to read Office's Word, Excel and PowerPoint programs on the iPad, it will require a subscription to Microsoft's Office 365 to create and edit documents on the device. The Office 365 subscriptions cost $70 or $100 annually, with the lower price placing more restrictions on the number and types of devices that can be used.The Office 365 subscriptions also have been required to use Office apps built for the iPhone and Android phones last summer, so many iPad owners many already have one.But millions of other people with iPads probably haven't had a reason to buy an Office 365 until Thursday. Nearly 200 million iPads had been sold through the end of 2013, meaning about 5 percent of those device owners would have to pay for a $100 annual subscription to generate an additional $1 billion in revenue.Microsoft hasn't said how many Office 365 subscribers it already has, but Nomura analyst Rick Sherlund estimates the number at anywhere between 14 million to 24 million. He estimates that the annual subscription revenue is running at about $2.5 billion.Office has long been one of Microsoft's gold mines. In the company's last fiscal year ended June 30, the business division that is anchored by Office posted an operating profit of $16.2 billion on revenue of $24.7 billion.The availability of an Office app also could encourage more people to buy an iPad. That, in turn, could siphon more sales away from laptops running on Windows, which also generates billions in licensing fees for Microsoft each year. This year, Gartner Inc. expects 271 million tablets to be sold, including those running on Windows and Android, versus a total of 277 million desktop and laptop computers. By the end of 2015, tablets should be outselling PCs by a wide margin, Gartner said.Microsoft hasn't made Office apps for Android tablets yet, though the company has previously said those will be coming. Last year, Office apps for Android phones came out a month after the iPhone versions debuted."We are taking great focus and great care that Office on every device shines through," Nadella said.That marks a change in sentiment for Microsoft.Even as it became clear iPad was reshaping computing, Ballmer steadfastly resisted making an Office app for the device. He had been hoping that most of the 1 billion worldwide Office users would decide to buy Windows tablets instead of the iPad, but there was little evidence that was happening in significant numbers. Sales of Microsoft's own Windows tablet, Surface, turned out to be a huge letdown.The Office app for the iPad has so many features designed for the device that Microsoft clearly was working on its design while Ballmer was still CEO, said Forrester Research analyst Rob Koplowitz.But it didn't hit the market until Nadella took over and that could signal a "sea change," Koplowitz said. "I am hoping we are seeing something different in terms of how Microsoft operates as a company."Nadella promised to show off more pieces of his "innovation agenda" for Windows next week at a software developers conference in San Francisco.