A+ A-
Print Email
Indian hockey chief coach Terry Walsh is aiming for a top-8 finish at the upcoming FIH World Cup to be played in The Hague from May 31 to June 15. 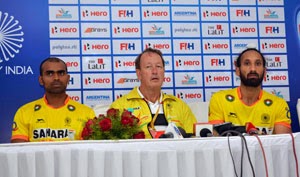 "Our first target is to set realistic goals for the World Cup and it is to be in the top-8. Going further from there will definitely be a bonus. The team is looking forward to converting the chances and score. In the practice sessions we are focusing on each area which will finally help in smashing the ball hard during the World Cup," said Walsh after the team's practice session here Thursday.The World Cup list of probables are currently undergoing a preparatory camp at the Major Dhyan Chand National Stadium."The second target is to believe in one's self -- an important element to perform as per expectations and the team is gradually building in this area. We are giving great emphasis on our defence as that will be the core to win the matches. We are satisfied with the ongoing sessions and the players are excited for the World Cup which is evident in the training sessions."Captain Sardar Singh said the team is totally focussed on the World Cup and trying their best to improve the levels of performance."Our complete focus is on the World Cup. We are practising hard to improve our game and want to raise the basic level of performance. The coach has introduced new techniques that will help us further. Right from the basic learning of using the stick technically to the positioning of the players, we are working on every aspect," said Sardar."Self-belief is really important for the upcoming matches as it will help us to perform better. The involvement of the midfielder and scoring is equally important. Each player should be careful about their position and the goal opportunities. Our coach is supportive and he keeps guiding in every manner possible," he said.