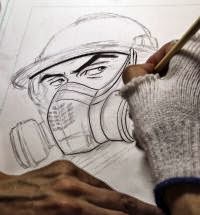 First off, no one who works at Japan’s wrecked nuclear power plant calls it Fukushima Daiichi, comic-book artist Kazuto Tatsuta says in his book about his time on the job. It’s “ichi efu,” or 1F.
It’s not “hell on earth,” but a life filled with a careful routine to protect against radiation. A good part of the day is spent putting on and taking off protective layer after layer: hazmat suits, gloves, boots and filtered masks. Even bus and van interiors are covered in plastic.
Workers say they will lose their jobs if they talk to reporters and their bosses find out. That makes Tatsuta’s manga, “1F: The Labor Diary Of Fukushima Daiichi Nuclear Power Plant,” a rare look at the nuclear plant that suffered three meltdowns after the 2011 tsunami, and will take decades to decommission.
Tatsuta worked at the plant from June to December 2012 in part because he was struggling as a manga artist, but “1F” is his biggest success yet.
The opening episode won a newcomer award and was published last year in Morning, a weekly manga magazine with a circulation of 300,000. The first several episodes are coming out as a book next month, and publisher Kodansha Ltd plans on turning “1F” into a series.
Tatsuta said “1F” is not about taking sides on the debate over nuclear power, but simply a story of what it’s like to work there.
“I just want to keep a record for history. I want to record what life was like, what I experienced,” he told The Associated Press in his studio outside Tokyo this week.
Tokyo Electric Power Co, the utility that runs Fukushima Daiichi, rarely provides media access to the inner workings of the plant, except for orchestrated press tours.
Tatsuta is a pen name. The 49-year-old artist asked that his real name not be used for fear of being barred from working at the plant in the future.
He said the job is surprisingly similar to other construction work, which also carries its risks, such as flying sparks and crashing walls.
“I never felt I was in physical danger. You can’t see radiation,” he said.
Tatsuta’s story, complete with drawings of shattered reactor buildings, brings to life everyday details — how gloves get drenched with sweat, or how annoyingly itchy a nose can get behind the mask.
Laughter and camaraderie fill the rest area, where drinks and food are plentiful but there are no flushing toilets. In one telling scene, an elderly worker says: “This is like going to war.” Drawings show the daily routine, different kinds of masks, the layout of the grounds.
After Tatsuta had to quit when his radiation exposure neared the annual legal limit of 20 millisieverts, he decided to put down what he had undergone in manga. Almost every profession — baseball player, “salaryman,” samurai, chef — has been depicted in manga, exemplified in acclaimed works such as Osamu Tezuka’s “Astro Boy” and Oscar-winning Hayao Miyazaki’s “Spirited Away.” But no manga had ever depicted the life of the nuclear worker.
Tatsuta stressed he doesn’t want to glorify them but insisted they deserve to get paid more. The work starts at about 8,000 yen a day, although it goes up to 20,000 a day for the most dangerous tasks.
TEPCO declined to comment on the book.
“It’s just manga,” says spokesman Koichiro Shiraki, who has read the work.