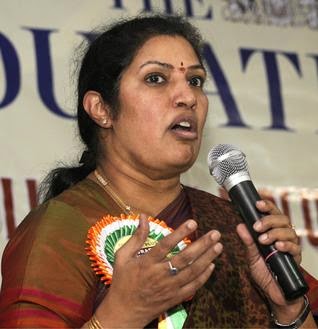 Purandeswari, former central minister from congress party who resigned due to political issues on Telangana.
Purandeswari has been a great minister from Vishakapatnam who played a key role in development of vizag. Now, she is interested in joining in BJP and expressed her views about her political career. Purandeswari held a press meet today , many of her followers and suporters attended the meet today. As per confidential news she would be announcing her political career in BJP today after meeting with Rajnadh Singh, Sushma Swaraj and Arun jatli.
She expressed her views about continuing her polictical career in Vishakapatnam itself. But some of her followers expressed that it would be better if she joins TDP and it would help her as it is her father's party. But Daggubati couple decided to join in central politics . Currently a meet is going to be held in  Rishikonda. Malla Vijaya Raju says that they couldn't do anything other than supporting her but says that her decision is already taken and decided.