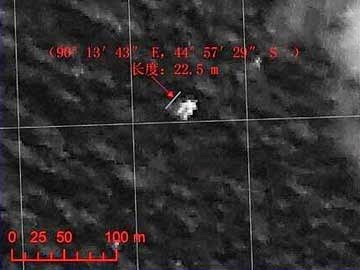 China has a new satellite image of a large floating object in the Indian Ocean that could be related to missing Malaysia Airlines Flight MH370, officials said on Saturday.Malaysian Transport Minister Hishammuddin Hussein announced the news during his daily press briefing when he was handed a note by an aide. "The news that I just received is that the Chinese ambassador received satellite images of floating objects in the southern corridor and they will be sending ships to verify," Hishammuddin said.In a later press statement, the transport ministry clarified that there was one "suspected" object with an estimated size of 22.5 metres by 13 metres (74 by 43 feet).Hishammuddin had provided different dimensions which the statement said was the result of a telephone miscommunication.Chinese state television later released a copy of the undated, grainy satellite image.Attached coordinates suggested it was in roughly the same area of remote ocean as two possible objects spotted on satellite images taken March 16 and released by the Australian government on Thursday.China's Xinhua news agency said the object was spotted 120 kilometres from those spotted by Australia.Australian and US spotter planes have been scouring the area for the past three days, but without finding any sign of the suspected wreckage.