Home » friend » life » lifestories » lifestyle » stranger » Why We Believe Strangers ? Do You Know That Every Close Friend Of You Was A Stranger Once ..!!

Why We Believe Strangers ? Do You Know That Every Close Friend Of You Was A Stranger Once ..!!

A+ A-
Print Email
When someone asks you to define a stranger , what would be your answer? " It is some one whom we never felt close and neither a friend nor an acquitance." Every friend that we have today once passed the stage of strangeness .All of us believe the person we meet for the first time, the so called stranger. Whom we do not believe is someone we know. Ironic! Isn't it. But that is true. 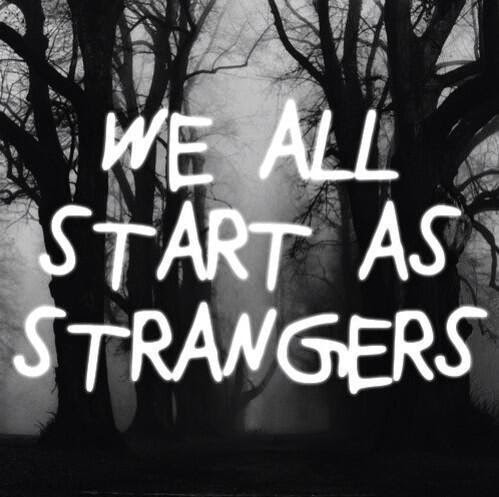 We meet this strange person, we believe him someway or the other, sometimes we rely on his words, and if words seem deceiving we rely on his actions. Whenever we meet someone new in our lives, someone we don't have any clue about, for whom we do not have pre-conceived notions, what do we do? We choose to believe him for a while.

It gives us a thread to start our thinking process. Otherwise, what do we have? Nothing! Just some mismatched thoughts. We got to start somewhere to reach somewhere. All of us have this tendency to form a judgement for this strange person. And when we do, we count on it more than required, that is when we stop believing the person we now know, who isn't a stranger anymore.


When I came to Johannesburg from the countryside, I knew nobody, but many strangers were very kind to me. I then was dragged into politics, and then, subsequently, I became a lawyer.Nelson Mandela


This video was a personal experience of a person when he went Europe and was roaming blindly.

"Last year while I was traveling through Europe blindly, not knowing a single person or where I would stay, amazing strangers opened up their homes and lives to me in beautiful acts of kindness. The most memorable of strangers was French activist and We Are Change Paris member Joel Boujassy. Joel taught me an important message about life in the 2 weeks I spent with him. It does not matter how small your apartment is or how little money you have. What matters most is the company you keep and the attitude you have. Joel may have not been a well known figure throughout the movement, but the person he was deserves as much respect and tribute as anyone else."

We do experience a type of hesitation, unwillingness and showing disinterest for the first time when we speak to them.Because we were told from the very childhood not to talk more with strangers.
But , doesn't every friend of you is a stranger once ? It's quiet a simple transaction really. You're given a clean slate with a stranger to project yourself as you wish and the other person will accept you without question. Since you've been given this leverage, in our heads we're going to extend them the same courtesy, also you wouldn't question them and "offend" them now, would you?

Another theory for this would be that humans, by elementary nature, are the believing kinds, it's never "Why would he tell the truth?" It's always, "Why would he lie?".