A+ A-
Print Email
Poverty means the general scarcity or death, or the state of which one lacks a certain amount of material. There are different characteristics of poverty. They are Health, Hunger, Education, Housing, Utility and Violence. 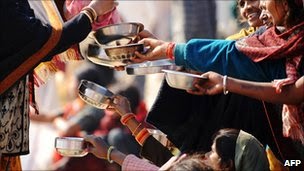 India, the largest democracy of 1.25 billion people, is also the biggest centre of poverty in the world-it is both widespread and intense. Today India has officially 269 million (or 22 percent) people under the poverty line, as against 407 million in 2004-05. This is latest claim of India’s Planning Commission in July 2013. In 2011, it fixed the poverty line at Rs.32 per day in urban areas and Rs.26 in the rural areas. It was reduced to rupees 26.80 and rupees 22.40 in march 2012. As a result, only 21.9% people are officially poor. A brilliant game of counting the poor! And a sick comedy as well. When the poverty estimate was severely criticized, the government appointed yet another committee, the Rangarajan committee, to look into the poverty-line philosophy, it is surely a sick joke people of India are quite used to.

Various poverty reduction strategies are broadly categorized here based on whether they make more of the basic human needs available or whether they increase the disposable income needed to purchase those needs. Some strategies such as building roads can both bring access to various basic needs, such as fertilizer or health care from urban areas, as well as increase incomes, by bringing better access to urban markets.

By increasing the supply of basic needs we can reduce the poverty to some extent.
The comprehensive Multidimensional poverty index (MPI) of UK based oxford poverty and human development initiative (OPHI) and the United Nations development program (UNDP) gives a better insight into the extent and nature of poverty. The MPI puts Indian poverty at about 53 %( 650 million poor).

While no one believes the official poverty data of Indian government, it is fair to say that about 400-600 million people are poor in India. While these can never in agreement on poverty numbers, compare these numbers with European Union and US populations of 500 million and 350 million, respectively. These are huge numbers by any standard.
India hold the distinction of having the most number of poor of the world-a super poor nation! Consequently, south Asia has become the world’s biggest centre of extreme poverty. On the World Bank’s extreme poverty line of 1.25 dollars per day, there are roughly 500 million extreme poor in south Asia-most of it in India. The only other comparable pocket of poverty is the sub Saharan Africa, with 400 million people in extreme poverty.

POVERTY IS MUCH MORE THAN INCOME!!

Counting the poor on some arbitrary income line is an artificial number game. Poverty must be looked beyond income. Research of past few decades has firmly established that poverty cannot be properly understood in economic terms alone- divorced of social, cultural and political perspectives.
People are social beings; processes and activities of society affect their state of well-being. Studies of problems of poor people and their communities have led to an understanding of poverty as a situation of several simultaneous deprivations, feeding one another. The new perspective sees poverty as a human condition that reflects failures in many aspects of human life-related to nourishment, employment, shelter.
Health, education, social and political participation etc. Therefore, the right way to view poverty is to see all its manifestations ad its multidimensional nature. This makes the MPI very attractive and useful tool for policy planners. Several nations like Brazil and Mexico have adopted variations of the MPI technique for estimating poverty.
The most interesting case is that of Bhutan which measures its progress by what it called gross national happiness index which is calculated by the same Alike-Foster methodology that goes behind the MPI. Bhutan’s case will be commented upon later when we talk about sustainable development. If poverty is multidimensional, so should be development. Removing poverty through micro finance: turning the poor into entrepreneurs!
Faulty economic reforms is one of the major causes….MODERNISATION or merely CORPORISATION?
An ideal development approach for India could be: To discard GDP as a measure of progress. India should develop a holistic development model.
Population stabilization:
There are many popular myths around population of India. At the core of it, lies the issue of women empowerment, which itself is powerful contraceptive.
Population control should be done through people’s development.