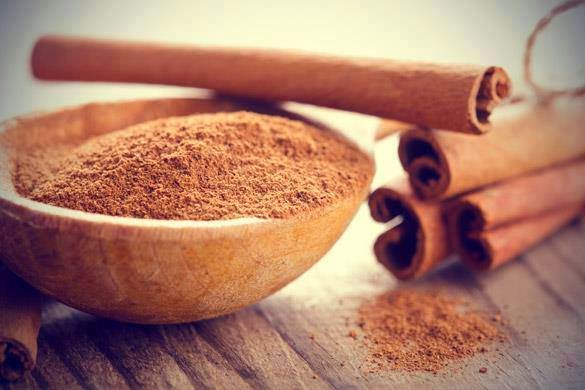 Cinnamon is a highly prized spice that has been used since

ancient times for its medicinal and healing properties. It has

the highest antioxidant strength of all the food sources and is

several hundreds more potent than any fruit or vegetable.

minerals such as chromium, iron, zinc, and calcium. It is

indigestion, flatulence, and arthritis. Cinnamon is known to

eliminate congestion and mucus from the body. It is also

very beneficial for lowering cholesterol and to help regulate

blood sugar. It is known to help increase circulation and

beneficial for helping to prevent strokes and coronary artery

disease. It is also very good for reducing inflammation in the

body making it helpful for people with autoimmune

disorders such as fibromyalgia and chronic fatigue

syndrome. Cinnamon also has the amazing ability to stop

has anti-cancer properties and has been known to reduce

the growth of leukemia and lymphoma cancer cells within

the body. It is commonly used in gum and dental treatments

due to its pain relieving and antiseptic properties. Cinnamon

cinnamon spice or its essential oil can help make you more

alert and focused. Cinnamon oil is also one of the most

antimicrobial essential oils and is a potent disinfectant

around the home and office. Cinnamon contains anti

E. coli, and cold and flu germs. Consider adding a couple of

pinches of cinnamon every morning to morning tea, cereal

with 2 apples, 3 medjool dates, and a pinch of cinnamon

. Place in a food processor and blend until smooth for a fresh

sticks, and cinnamon extract supplements can be found

online or at your local grocery store.