Home » lifestories » How the zebra earned its stripes

How the zebra earned its stripes 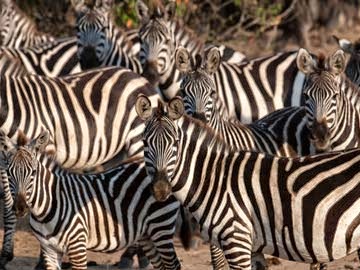 Zebras have stripes to deter the tsetse and other blood-sucking flies, according to a fresh bid to settle a debate that has raged among biologists for over 140 years.Since the 1870s, in a dispute sparked by the founders of evolutionary theory Charles Darwin and Alfred Russel Wallace, scientists have squabbled over how the zebra got its trademark look.Are its stripes for camouflage, protecting the zebra with a "motion dazzle confusion effect" against hyenas, lions and other predators in the savannah?Do the stripes radiate heat to keep the zebra cool?Or do they have a social role -- for group identity, perhaps, or mating?But a new study, published in the journal Nature Communications on Tuesday, says the strongest likelihood is that the stripes discourage parasitic flies.The finding was intriguingly thrown up by lab experiments in 2012 that showed how blood-feeding flies shun stripey surfaces and prefer instead to land on uniform colours.Researchers led by Tim Caro of the University of California at Davis, say there is no black-and-white answer to the Great Stripe Riddle -- but the insect theory is by far the best bet."A solution to the riddle of zebra stripes, discussed by Wallace and Darwin, is at hand," they write.The team found a strong geographical overlap between zebras and the two groups of biting flies, Tabanus and Glossina, that feed on equid species, which explains why zebras would need a shield against this pest.There is also plenty of indirect evidence, they say.Other equid species, such as wild horses, are far more likely to be plagued by biting insects.Researchers find comparatively little blood from zebras in tsetse flies, even though the zebra has a thin coat with hair strands that are shorter and finer than those of giraffes and antelopes.At the same time, zebras are far less susceptible to sleeping sickness, a tsetse-borne disease that is widespread among other African equids.The correlation between reduced biting-fly nuisance and stripes is "significant," says the study."Conversely, there is no consistent support for camouflage, predator avoidance, heat management or social interaction hypothesis."Parasitic flies can hand on a range of diseases when they bite their prey, and their appetite can be enormous.Experiments with horse-flies carried out in the United States found that cows can lose between 200 and 500 cubic centimetres (0.4 and 1.05 pints) of blood per day to the insects, and as much as 16.9 kilos (37.2 pounds) in weight over eight weeks.