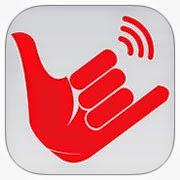 Even if you're stranded in a communications desert with no Internet access, FireChat lets you text with people nearby -- and conceivably with people far away, depending on how wide a network is created through ever-expanding circles of local connections. "FireChat seems to keep on exploding in countries when it hits the sweet spot in terms of density," noted Open Garden's Christophe Daligault.

FireChat takes advantage of the Multipeer Connectivity Framework in iOS 7. This feature allows developers to connect devices to each other using Bluetooth, WiFi, and peer-to-peer connections.
Users must be within a maximum of 100 feet of another to use the Nearby feature (though they can connect with other users around their countries through the Internet in the "Everyone" chat room); it works best when users are within 30 feet of each other. However, if there are many people using the app within a close range of each other, the network becomes larger and more robust. 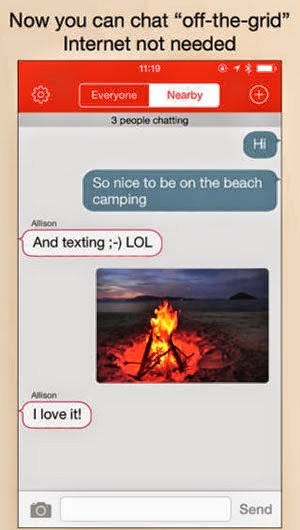 "You may be connected to a person by Bluetooth or WiFi that is less than 30 feet away from you, but chatting with others that are outside that radius because of the network created by all the connections combined," Jim McGregor, principal at Tirias Research, told TechNewsWorld. "The advantage is that you don't worry about cellular or Internet connectivity, but you are limited by distance and the number of people that are logged into the application at the time."
This type of connectivity is also called a "mesh network," where all the devices in a network relay data to the others.
"We thought that FireChat would provide a great example of what's possible with P2P mesh networks," Christophe Daligault, head of sales and marketing at FireChat developer Open Garden, told TechNewsWorld. "This demonstrates that you don't need the Internet for everything."
FireChat users can chat and share photos with either one person or a group. Users choose a screen name and need not use their Facebook account or email address to login. There are no passwords to remember, which adds to the idea that people use the app anonymously. Open Garden also promises that the app has no significant impact on battery consumption.
Users have flocked to the app, with around 1.4 sign-ups per second, according to Daligault.

"FireChat seems to keep on exploding in countries when it hits the sweet spot in terms of density," he said. "It has reached the top 10 amongst social networking apps in more than 80 countries, ahead of Facebook and WhatsApp. Right now it is No. 1 in Spain, for example."
Open Garden had privacy in mind when creating FireChat.
"Many apps provide great person-to-person communications," Daligault noted. "At the same time, there are growing concerns for privacy and perhaps general Facebook fatigue. So this seems like the best way to bring a new way to communicate to the iPhone."

The app would seem to have a deeper impact at events where many people are gathered. At music festivals, for instance, people have trouble finding a cell network connection due to traffic density.
The Burning Man festival, meanwhile, takes in the middle of the desert, where connectivity is often at a premium. Conferences, sporting events, and conventions are also events where the app might prove useful, while travelers who get separated in a crowded market might use it to find each other again.
It is not quite clear what features Open Garden will add to FireChat. For now, the company is focused on removing bugs and doing a better job of explaining how the app works, according to Daligault. However, Open Garden is planning to launch an iPad app, and those interested in an Android version can sign up to be notified