Home » books » The Oath Of Vayuputras 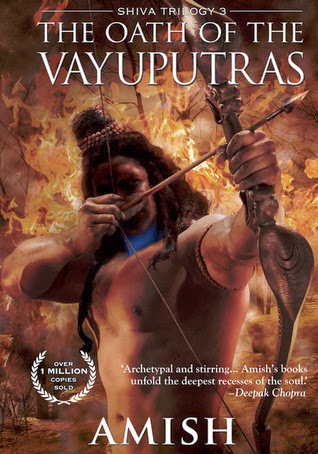 Download
In The Immortals Of Meluha, Shiva, a tribal from Tibet, was invited to the kingdom of Meluha, ruled by the Suryavanshis who are at war with the ‘evil’ Chandravanshis and facing attacks by Naga terrorists. Meluhan citizens live long thanks to the Somras, a drink manufactured by Meluhan scientists. Shiva’s throat turns blue when he first drinks the Somras, giving rise to the belief that he is the Neelkanth, an incarnation of Lord Rudra. The book ends with Shiva helping the Meluhan king, Daksha, defeat the Chandravanshi king.
The Secret Of The Nagas suggested the notion of evil is more complicated than the Meluhans would have Shiva believe. The Chandravanshis, it turned out, also believe in the legend of the Neelkanth and while their way of life is not as orderly as the Meluhan’s, it isn’t evil. Something far more sinister is afoot — this is causing the river Saraswati to dry up, creating deformed babies and causing cancerous diseases.
While the first book was a runaway success, the second book received criticism for bad editing and sloppy writing. Philosophical discourses interfered with the arc of the story. Those chinks have been ironed out in The Oath... and while characters do slip into monologues about topics like life and the significance of human action, there’s enough richly detailed action to engage those reading the book purely for ploy. One scene where Sati, Shiva’s wife, fights a group of assassins is particularly well-told.
New characters are introduced in this book, including the Vayuputras, Lord Rudra’s tribe and those whose divinely assigned task is to help the next incarnation of Lord Rudra —Shiva — with his mission. It’s unclear why author Amish Tripathi imagined the Vayuputras to be from present-day Iran but as a result, the description of Zoroastrian mythological elements seems ornamental. Tripathi also mentions Hariyuappa in the book, (an obvious reference to Harappa) melding ancient history with mythology. Again, there doesn’t seem to be a good reason to do this.
Ultimately, different characters turn out to be weak, greedy, foolish, brave or principled. But Tripathi doesn’t tag them with value judgements like ‘evil’. Which leads to an end that is fitting, for ultimately, everyone has lost something.