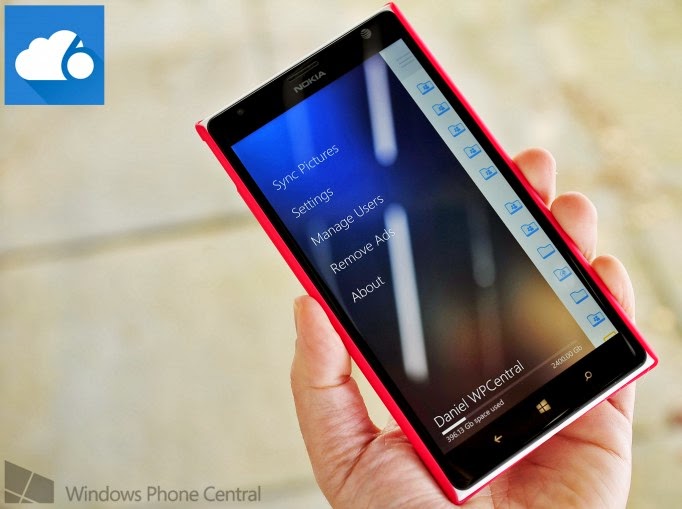 Most of you are big fans of OneDrive. It integrates nicely into Windows Phone, Windows 8 and the Xbox One. That doesn’t mean you don’t use other cloud storage solutions from time to time. It might work related or a classmate sharing a file that you venture to places like Dropbox, Box, Mega and other cloud storage providers.
Dropbox has official apps on Android, iOS, BlackBerry and the Kindle Fire, but not on Windows Phone. Does that matter now that Rudy Huyn has just released his third-party Dropbox client called CloudSix for Dropbox?
Let’s find out with our hands on video and exclusive screenshots. Ready for the good news? The app is a full featured and free Dropbox app on Windows Phone. It’s also just the beginning of a new wave of apps from Rudy that we’ll tell you about shortly.
Here’s what you get with CloudSix for Dropbox on Windows Phone:

We logged into our Dropbox account and are quite impressed with the app. All our files, photos and videos were viewable in the app. The app even has multi-account support, which is very cool and useful if you’re juggling a Dropbox account for personal storage and the other more business orientated. CloudSix for Dropbox also backs up photos or videos from your photo library if you want. Another bonus feature is that you can activate protection for the app and set a pin. This means you'll need to enter a pin when launching CloudSix for Dropbox. A nice feature to keep private photos private.
You can long press a file or folder to bring up the action menu. If you do that you’ll see options for renaming the file, sharing it, creating/copying a link for it, adding it as a favorite or deleting it. You can open PDFs in your PDF Windows Phone app of choice, while word documents are viewable directly in CloudSix.

CloudSix for Dropbox is just the beginning. There’s also one last surprise feature in CloudSix. Other developers can use the app as a file picker or file saver (similar experience on Windows 8). Meaning a developer who has made an emulator on Windows Phone can make it so that their app can retrieve ROMs from CloudSix for Dropbox. They don’t need to add Dropbox support to their app, just install a NuGet package and create a CloudSixFilePicker with the parameters they want.
It’s pretty cool that with 2 lines of a code other developers can enable cloud storage in their apps through CloudSix for Dropbox. As an example, Rudy has just updated his Snapchat client, 6Snap, to be the first app to take advantage of this functionality. Update 6Snap and you’ll be able to save your snaps to Dropbox through CloudSix for Dropbox. Very cool.

There’s one last surprise from Rudy though. CloudSix for Dropbox is just the beginning of a line of cloud storage apps. CloudSix for Dropbox tackles and takes on Dropbox, but he plans to introduce apps forOneDrive, Google Drive, Box.com and Mega. Those apps will all offer similar functionality and include the option for other developers to tap into them for cloud storage.