A+ A-
Print Email
Narendra Damodar Modi, one of India's most polarising figures, is the BJP's choice for Prime Minister. 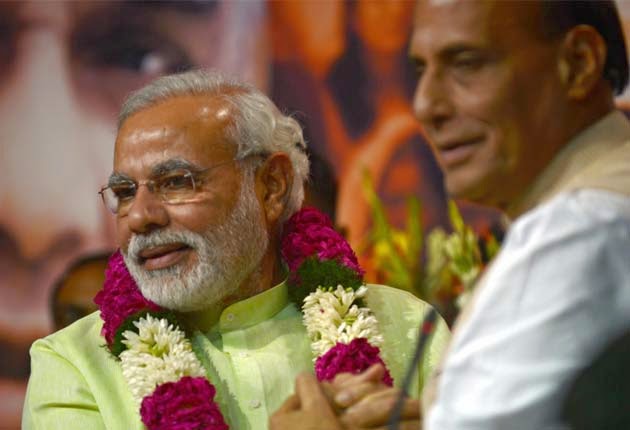 The announcement came despite stiff opposition from BJP heavyweight LK Advani. His supporters argue that it was inevitable after the Gujarat Chief Minister was made the chairman of the BJP's election strategy committee, which virtually made him the party's face for the national elections due by May.It became clear in December 2012 that Narendra Modi's aspiration to step out of Gujarat could not be ignored after he registered a third successive and very convincing win in the Assembly elections. In the days since, he has lunched with ambassadors of the European Union, which ended its decade-long boycott of the Gujarat Chief Minster saying, "we are now in a new phase." They had boycotted all diplomatic engagement with him after the 2002 communal riots in Gujarat. And though the US continues to deny him a visa, some lawmakers in that country have suggested that the policy be reviewed. Critics accuse Mr Modi of not doing enough to stem communal violence in 2002; some have even alleged that he quietly encouraged it - allegations that he has strenuously denied and that have never been proved in inquiries.In an interview earlier this year, Mr Modi said that he did everything he could to check the violence, and controversially appeared to compare the deaths to that of a puppy being run over.  After years as a political pariah, shunned in India and abroad, Mr Modi has spent the last few years trumpeting Gujarat's high growth and investment report card to project himself as a progressive, pro-development leader best equipped to help rid the country of its economic and social problems. His detractors allege that marketing savvy and not a change of heart has shaped the new Modi.  Officials in Mr Modi's government and local business leaders paint the picture of a man with a phenomenal memory, great attention to detail, unflagging energy and a flair for publicity. People who have met him say nothing escapes him. But they also describe him as a man with a vindictive streak, capable of holding grudges for years and intolerant of dissent.  Narendra Modi was born to lower middle-class parents in northern Gujarat on September 17, 1950. He holds a Master's degree in political science.  Mr Modi joined and rose through the ranks of the Rashtriya Swayamsevak Sangh, the ideological parent of the BJP, early in life.  A stocky, bespectacled man with a trimmed white beard, the Gujarat Chief Minister is known for his ascetic lifestyle and enthusiasm for yoga. He rises early and has for years read news on the Internet. He uses social media very effectively, tweeting extensively and has more than 2.2 million followers on Twitter.  Though he married at a young age, he has never publicly acknowledged this. He has no children. Mr Modi first became Chief Minister in October, 2001, just months before the communal riots.