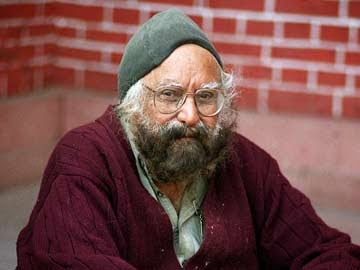 Celebrated author and journalist, Khushwant Singh, has died at 99.One of India's best known raconteurs, Mr Singh was famous for his acid wit and liberal political views. His son Rahul Singh said he passed away peacefully at his home in Sujan Singh Park in Delhi. He will be cremated this afternoon.Prime Minister Manmohan Singh called him a "gifted author, candid commentator and a dear friend". In a condolence message, he said, "He lived a truly creative life."News of his death set off a frenzy of messages, tributes and anecdotes on social media."The bulb is extinguished ...Goodbye Khushwant Singh," tweeted Ashok Malik."We lost a national treasure in every sense of the word today. Go out and get a #KhushwantSingh book. It just might change your life," wrote Vir Das.Mr Singh was born on February 2, 1915, in Hadali, now in Pakistan's Punjab.He was the founder-editor of Yojana and also edited The Illustrated Weekly of India, the National Herald and the Hindustan Times.Millions of his fans today remembered his classics like "Train to Pakistan", "I Shall Not Hear the Nightingale" and "Delhi - A Novel". He was an unstoppable force even a few years short of a century. At 95, he wrote the novel "The Sunset Club". His acclaimed works of non-fiction include the classic two-volume "A History of the Sikhs", a number of translations and works on Sikh religion and culture, Delhi, nature, current affairs and Urdu poetry. His autobiography, "Truth, Love and a Little Malice", was published by Penguin Books in 2002.Mr Singh was a Member of Parliament from 1980 to 1986. He was awarded the Padma Bhushan in 1974 but returned it in 1984, in protest against the storming of the Golden Temple in Amritsar by the Indian Army. In 2007, he was awarded the Padma Vibhushan."He liked to call a spade a spade. He hated hypocrisy, fundamentalism, and was a gentle person" says his son.