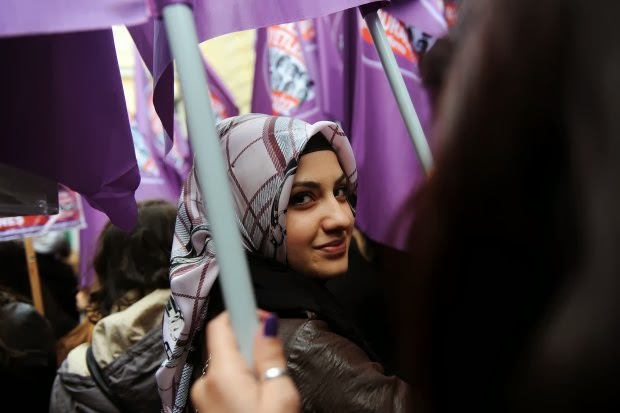 From its early Cold War ties to why it hasn’t reached the Hallmark ranks, a look at the long and surprising journey of International Women’s Day, celebrated March 8.
On March 8, millions of women around the world will observe International Women's Day, with thousands taking to the streets to demonstrate for equal rights.
If you live in the U.S., though, you may well have made other plans. But don’t feel too bad. The celebration that was born in this country has always done better elsewhere, and for reasons that have nothing to do with apathy and everything to do with history.

The first Women's Day was observed in the U.S. in February 1909 in a large demonstration marking the one-year anniversary of the 1908 New York Garment Workers' Strike. Quickly thereafter, women's days became a rallying point around which people around the world protested war and fought for women's suffrage. In 1917, a Women's Day protest in St. Petersburg even triggered the revolution responsible for bringing down the Russian Empire. In 1975 the U.N. established March 8 as its official International Women's Day and initiated the Decade for Women the following year.
With more than 17 million women living in poverty  in the United States alone, over 600,000 women and girls trafficked internationally per year, and an estimated seven out of 10 women worldwide reporting they have experienced physical and sexual violence, why don't more American women observe International Women's Day? (Hallmark doesn't even bother making cards dedicated to International Women's Day or Women's History Month.)
According to historian Estelle B. Freedman, the absence of celebrations in this country has less to do with our indifference than it does with the holiday’s long association with the Communist bloc.
"Before World War I, International Women's Day really took off here during the suffrage and labor movement,” says Freedman, a Stanford history professor and author of No Turning Back: The History of Feminism and the Future of Women. “But then it was sustained as a communist, socialist holiday, particularly after the Russian Revolution. So, during the beginning of the Cold War especially, it wasn't something that was embraced in the United States."
Today IWD is still celebrated in places such as China and Russia as a sort of state-sanctioned Valentine's Day/Mother's Day hybrid. The tradition in those countries is to give flowers and gifts to the important women in one's life.

Women are the most effective investment that can be made in terms of development.

But with the revival of feminism in the United States in the ’60s, Freedman says, the significance of IWD reemerged as an important holiday across the U.S. Today, IWD is still observed through conferences and educational events on college campuses, and is used as an anchoring point for women's movements in various parts of the world. "Where there are people who are mobilized behind a cause and the need to rally around some established cultural event, that's when we see International Women's Day reemerge," Freedman says.
In Poland for example, demonstrations have occurred on March 8 in every major city since 2000. A group called Porozumienie Kobiet 8 Marca ("The 8th of March Women's Alliance") organizes "Manifas" in which thousands of men and women call for government action on issues ranging from reproductive rights and domestic violence to economic equality.
"In the early years it was difficult to disassociate our protests from the so-called 'communist time'," said Malgorzata Danicka, a Warsaw resident who has worked with the organization for several years. "But I think we've managed to reclaim the meaning of International Women's Day in recent years. We're now the second largest protest in Poland, behind only last year's gigantic union demonstration."
In several countries in the Middle East, demonstrators have taken to the streets on or around March 8 in recent years, including in Egypt, Tunisia, Lebanon, Yemen, and Iran.
Egypt observes its own National Women’s Day on March 16. "Nevertheless, Egyptian women also join the rest of the world and celebrate International Women's Day on March 8," said leading Egyptian writer and feminist Dr. Nawal El Saadawi. "Women paid a high price in the Egyptian revolution--we were killed, we were in the front everyday. Through Nasser, Sadat, Mubarak, the Muslim Brotherhood—we were there through it all. And we are still fighting for our rights. It is very important for us that we continue our domestic fight as well as connect with the international one." Saadawi emphasized the need for an equal international exchange of ideas between women throughout the world.
Melanne Verveer, director of the Institute for Women, Peace and Security at Georgetown University and the first U.S. Ambassador for Women's Global Issues, says that there has been a shift in the way we view women's issues in the last several years.
"This has happened in many ways," said Verveer, " We have increased our interconnectivity; we realize that women are the most effective investment that can be made in terms of development. And there is an increasing wealth of data that demonstrates how critical it is for women to participate in the economy, in politics and in education."
Verveer says we should be mindful not only of the work toward equality that needs to be done in the United States, but that we are connected with women everywhere. "Women's progress in any place is progress for our world," she said.